Fairly quiet at the club last night, a Saga game, Age of Sigmar with some very strange figures but all beautifully painted, real works of art, a WWII boardgame which I think concentrated on logistics as the title was Quartermaster General and my own game with Black Seas.

Andy couldn't make it so there were three of us, the first scenario had a frigate and two brigs of the Royal Navy and La Royale (the Frenchies) bearing down on a Spanish treasure ship watering at an island. The Spaniard quickly recovered her crew and set sail with the weather gauge which meant she was coming straight at me, the French were struggling against the wind so I thought I would get in quickly, board and seize the filthy lucre, to this end I laid my two brigs alongside after first giving her several broadsides. The French now turned up and dealt out a lot of punishment to my starboard brig while most of her crew were in combat on the Spaniards deck, in the confusion the brig struck her colours but the Spaniards could not take advantage as my other brig now sent across her boarders. Within minutes the Spaniard was captured and the White Duster again run up on my second brig.

My frigate attempted to join the fray but the wind was against her and the rocky outcrops and sandbars of the island were too close and had to be avoided, she did manage to get hits on the French but nothing serious. The Spaniard manged to ungrapple and I decided discretion was the better part of valour and put a final broadside into her and sent her and the treasure to Davy Jones' locker, I then sped away as fast as I could as the wind had at last turned in my favour. Could have been better but one Spaniard down and no gold for Napoleon (spin is not new).

The second game had four Royal Navy brigs against two La Royale frigates, an interesting little battle. The Frenchies this time struggled to get around the island while we, with full sails closed the gap, paraphrasing Lord Nelson I could not go wrong if I put my ships to the Frenchies, Ian meanwhile wandered off to clear the rocks and sandbars. In a 'Nelson Touch' I ran my brigs through the French line and let off broadsides which raked the stem and sterns of both frigates, my shooting was spectacular as my veterans rained death and destruction on the French ships. I then received a reply and the French pounded one of my brigs mercilessly and she slipped beneath the waves, it was time for the Sea Wolf to 'leg it' in naval parlance.

La Royale did not seem to want to put up a fight as they limped to the south, Ian had now tacked and caught up with them, cannonballs flew and destroyed bulkheads and crew, the captains of both French ships were killed along with a replacement officer as the veteran gunners of the Royal Navy found the range. The brigs like terriers continued to close with their wounded prey, one Frenchman had had enough and struck her colours, the other continued to fight. The Sea Wolf had now rejoined the battle, having cleared the decks of dead and wounded gunners, delivering several broadsides along with Ian's ships which sent the second frigate to a watery grave.

So there we go, two excellent little games, fast and furious, I had also worked out the wind rules which helped me enjoy the game more. This is far better than the WWII version for me and has an almost cinematic feel to it, we added one of the advanced rules this time where you could fire as you passed a ship rather than fire at the end of your movement, a very good rule. I don't know how a game with a full battlefleet will work but these small engagements typical of many during the wars are great fun.

I almost forgot, if you like to paint near your PC, as I think most of us do, and you like some mindless background try Strike Back, I am on Season 7 now and have enjoyed each one immensely. It must be targeted at young lads but it matures as it goes along and the story lines and twists and turns are first class. Warning, there are women in the team and you know how I normally feel about this, but hats off, these girls really look like they know their business for a change. Yes it's daft but it is great entertainment, well I enjoyed it, one word of warning, the first series is just OK, the rest are top notch. 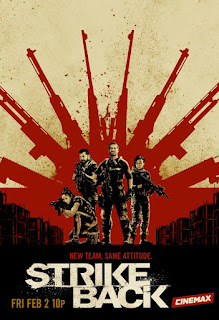