This may be my longest period without a post, I went to the club last week and we played our second game in the Aliens campaign, it is the kind of game where you had to be there. The movie cliches, quips and attempts at acting in character from the players is the real fun, basically we moved around a complex and killed a lot of bugs. We of course had the rules wrong and the bugs had four or five arms tied behind their backs, it will be different next time for the Colonial Marines. We decided to give Aliens a rest for at least a week and I opted for a Chain of Command game with my British against Rob's late war Germans, the rest of the guys are taking to the high seas during the same war.

Fran and I had a game organised for Sunday just gone, there was a slight hiccup with Covid regulations but as the Health Minister showed how the restrictions worked we followed his lead and went ahead. The scenario was from the original Johnny Reb book and was the action at Cool Springs, Virginia where the Union are attempting to make headway in a bridgehead across a creek while one of those surprise Confederate attacks comes out of the morning mist or it might have been the afternoon murk. 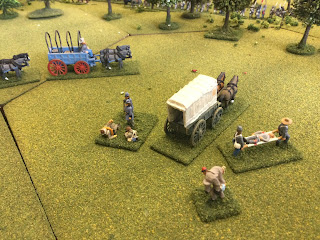 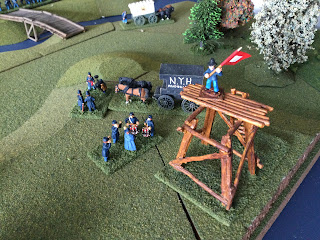 I was the Rebel commander in this game, in the past I have been the Union commander. I decided to advance my extreme right and hopefully disrupt the Federal left flank while keeping the whole of Rodes' arriving division on the left and pressurising the Union right. The scenario calls for the Rebs to inflict 60% casualties on the Union force and drive them back across the creek, in game terms this is a big ask and in my experience almost impossible the best they can hope for is making the Union position untenable leaving them in the grand scheme of things with retreat as the only option. The ground work for my excuse has been laid. 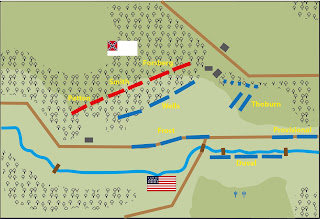 Fran pulled back to the main road while I followed up to the edge of the woods in the centre, I pushed Patton's brigade to hit the extreme end of the Union left, the Federals also pulled back on my left and lined a stone wall, the Provisional Brigade moved up to cover the Yankee far right. My opening attack on the Federal left was spectacularly successful, within a move the Union line here had collapsed, only two stubborn regiments remained slugging it out with the Texans, and these only by the skin of their teeth. Rodes had been given room to bring his brigades on and began to shake out into a battle line, it was looking like a pincer move would bring Confederate victory. 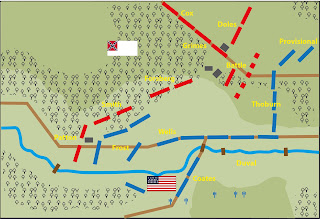 Of course nothing can be relied upon in a wargame, just as I was getting ready to wipe out the Federal left Fran surprised me by a desperate charge, flank fire hit the 2nd Minnesota but they still went forward and as the 4th Texas had already lost two stands they ran from the bayonets, but not far enough and their colours were captured. The 6th Texas also fled as did some Arkansas boys a little later, all of a sudden I had no right flank and the position of the doughty 3rd Arkansas around the little farm looked tenuous, I made a decision to peel off a regiment from my assault on the left to help. I was not actually afraid of the Union forces on my right and believed they could be contained but any further aggressive movements there were over. 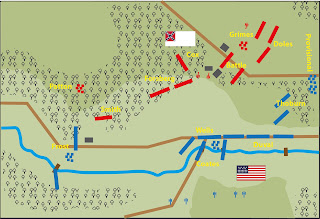 Rodes was now ready to launch his attack, and as Fran had had to move his poor Provisional brigade into the line to help hold it I smiled inwardly as surely these remnants would not stand up to Southern steel. A volley of close range musketry, then the order to fix bayonets went out, Thoburn's brigade began to fall back, it was all looking good. The New York Fire Zouaves (11th) threw back the 17th Georgia and the 9th Veteran Reserve Corps counter charged the 2nd Georgia, beat and captured them. Rodes was not pleased. This brave interlude did not help the Provisionals as another close range volley sent the 11th and the nearby 44th NY running while an advancing artillery battery unlimbered and destroyed the disordered 9th.

We had been gaming for six hours by this point and although things had generally went well for the Rebs and the Federals had now been forced back to the fords and the edge of the creek the cost to my forces had been heavy. I had lost three regiments completely and two more were routing one of which had no chance of rallying, several others were close to losing stands or had been reduced to three or four, with the union almost two deep protecting the fords and now with their entire artillery reserve in position I had asked enough of my brave boys and we halted for the day. Fran had defended well and caught me out a couple of times with his desperate charges which were spectacularly successful, his morale always seemed to just keep him out of trouble when all the odds were against him.

I have fought this scenario several times and it always gives a good game, as I said before it is a hard ask for the Rebs to fulfill the victory conditions and perhaps these should be amended, having said that my boys looked like being the victors for a couple of moves. The Rebs can then be victims of their own success, as the forward Federal regiments retreat a large defensive line forms around the fords covered by the 'grand battery' on the nearby hill and the terrain to their front is open and a killing ground.

So close yet so far, a great day of wargaming and a thanks to Fran for coming along and playing a good game.

Posted by George Anderson at 10:39