Last week I finished my three Grand Manner buildings which are for the Seven Years War, I have one BUA (built up area) with a small farm but decided I needed a few more and GM had a very good sale on just before Christmas. I wasn't looking forward to painting them as I wanted to get on with other stuff, however they turned out to be a lot easier than I thought, this process was helped by using mainly contrast paints on them, I am really sold on these, not all of them for historical projects, but a lot of them. 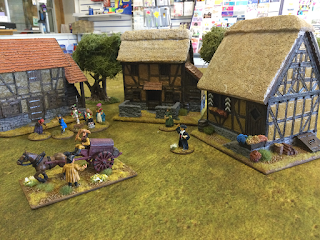 I got my first Italian Wars figures in the post last week, all Wargame Foundry, I was told that they would possibly take ages to get ready for painting but to my surprise I found there was very little work involved, hardly any flash at all. I had messed up as usual and not got enough figures to give me the 48 man unit I wanted, I couldn't let it sit so ordered up them up, Foundry put them in along with my large free order and did not charge the postage, I was also very happy to see that the men came with pikes, not a lot of people do that, so well done Foundry. I do not really want to rush this army however I started painting sixteen of the figures on Sunday, they are very easy to paint and I have decided in the main to use Contrast paints, some of these are more like coloured washes but others are just perfect and you can also mix the weaker ones or give them a second coat. 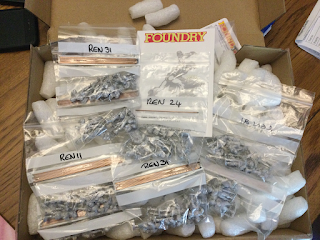 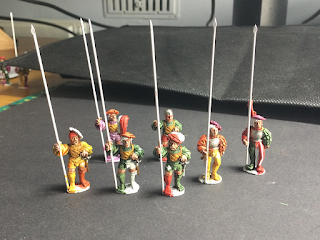 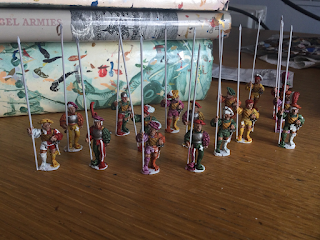 I am suffering from a bit of Italian Wars overload at the moment, I found a few blogs which have information on wargaming this period and have added them to my list. In reading them I find the period is quite diverse and the choices a wargamer has to make to get an army on the table are many. Of course what does it matter in the long run as my forces will most likely only ever grace my own table and no one else I know does Italian Wars, although Julian is painting up some cavalry at the moment. But here is the rub, I will know that those Swiss are more suited to 1494 rather than 1525 or that captain in charge of the victorious gendarmes at my attempt at the battle of Pavia actually died at Fornovo 25 years before or they are fighting for the Swiss Confederation in 1513 but have French flags. I have decided on a compromise, the first troops will be roughly based on Pavia and then I shall expand backwards to 1494 bringing in different factions and troop types. See, that wasn't hard was it.

Most of the guys I normally game with were not at the club this week so I was teetering on having a break when Ryan asked if anything was going. I offered him a game of Blood Bowl Sevens, it was about time my investment in this game got an outing against someone other than my son.

Bob: This game is all or nothing for the Lemmings Jim, unless it's a draw. 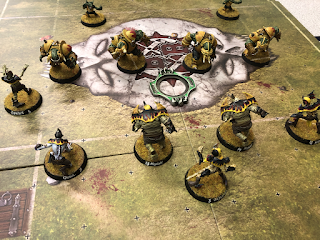 The first half found the Lemmings struggling to get the ball and then clear it from their own half, the Lemmings dealt out some pain but not enough to halt the Crunchers and push them back or get an opening, all their time was spent defending and desperately trying to keep the Orks from making a touchdown.

Jim: Bob, the Lemmings have a lot going forward and a lot coming back to go forward. 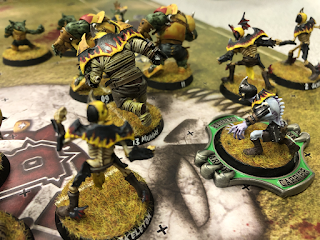 The second half and the Lemmings are on the attack, the forwards bulldoze a path for the ball carrier and he can almost touch the scoring line, just one more push and the Crunchers will be unable to stop him. Egged on by the crowd the player leaps forward and crashes face down on the grass and the ball bounces away to be picked up by the Crunchers, the home crowd are furious. The Crunchers now play a blinding pass to an unmarked catcher in the Lemmings half, a leap and the ball is caught, the Lemmings are not in a position to intercept and desperately try and run back the length of the pitch. It is too late and touchdown for the Crunchers! The Lemmings receive and have virtually no chance of getting an equaliser in the dying minutes, sure enough the whistle blows and it is 1-0 for the Carluke Crunchers.

Jim: The Crunchers created seven chances last season Bob, 49 of them were from open play.

Bob: Today was a good stroke of bad luck for the Lemmings Jim.

A nice bit of fun and we had a few laughs although I am beginning to get the sense that I need new D6's for the Lemmings, too many 1's.

I was supposed to be playing War and Conquest last Sunday but Mark sadly could not make it. I have a large Napoleonic game this Sunday in Grange-over-Sands organised once again by Rob and Julian, I missed the last one so I am looking forward to this one. I have also had an invite to travel up the M6 to Penrith next month for an Operation Sealion game with Matt Crump of Wargames in the Dungeon, I also have Partizan in May and a possible trip to Bristol in June for a games day organised by Rob Broom and hopefully some Chain of Command with mate Matt Smith. So fingers crossed.

The floodgates have now opened and last week I received three map projects (WWI, Falklands and the Quiberon Expedition of 1795) along with a request for some organisation diagrams. So I am once again a busy man.

Posted by George Anderson at 10:38