Bitterly cold on Club day but it didn't seem so bad after dark, even managed to park without a problem this time. I had looked online for a small scenario but had no luck, most were either too small or too big or the table was six feet across, you might hear my back groan from there. I had downloaded some Tabletop Teasers but for the life of me cannot find them, job for later. I therefore looked to my maps for the American War of Independence Atlas (I am assured it will be published this year, but I have my doubts as we are half way through March) and settled on White Plains. I only took the basics for the game from the map. 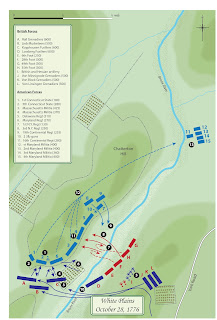 I decided to simply march forward and bring overwhelming fire to bear on the French line as it would be four battalions versus three, my guns hopefully would weaken the enemy so that I could cause them to retire and then mount the ridge to help Simon. As my men boldly marched to the sound of the drums and fifes they began to take casualties, these began to mount alarmingly and my line began to break up. My artillery barked and pathetically caused one casualty on the Grenadiers de France, this was to be the high point of their entire action. Simon on the left also advanced with vigour but Stuart moved to counter him and also pushed the Garde Lorraine into the orchard on the British flank, this caused a commotion as the British tried to counter this. Troops do not manoeuver well in the SYW.

As my attack stalled I threw caution to the wind and charged in the 87th Highlanders against the Garde Ecossaise whom they caused to flee the ridge but due to no support left themselves vulnerable to a French counter. The grueling French musketry along with their artillery fire had done for my brave boys, and they pulled back to reorganise, as I licked my wounds and had stern words with the Royal Artillery commander I realised I had lost two battalions and doubted whether my men were up to another attack.


On the left Simon had managed to hold off the Garde Lorraine and push the French back from their position causing them to lose two battalions, but he had also suffered and lost men. Stuart managed at the last moment to stop his brigade from disintegrating. As we looked over the battlefield both sides were one point away from their army break point and neither was going to manage it before the clock struck 2200 hrs. We declared a draw, with time perhaps Simon could have forced Stuart to withdraw but I could not have continued with an assault with my depleted brigade, so the result was fair.

It is a hard job to attack defenders in HoW, even more so when your opponent (Rob) failed to throw under a 4 on average dice for firing and your own artillery simply missed every shot bar one. Despite this it was a good game and the SYW does look good on a table, both Rob and Stuart now have the rules which was also a big help as it takes the pressure off running the game and trying to keep it right. I learned a few important points of the rules and have come to like them even more.

The 8th Foot and the Royal Baviere have now joined the forces of both sides and that is them complete for the foreseeable future, three infantry brigades and a cavalry brigade for both sides is more than enough for games here or at the club 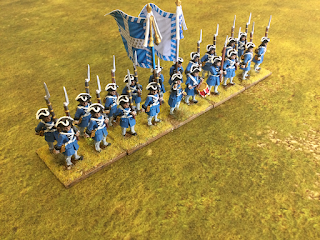 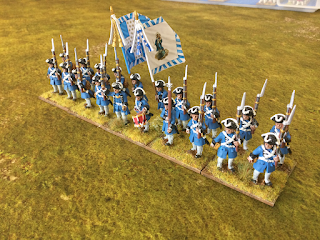 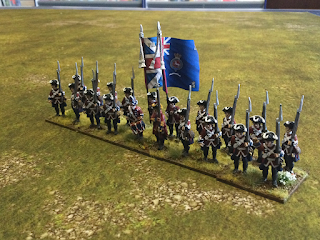 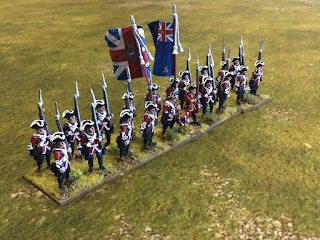 With the last of the SYW project complete I turned back to the vehicles I built a wee while ago, I had already primed them so set about weathering them, the German stuff was lightly done as I see them trundling into France fairly new. I have no idea what use the little Dingo will be in a game but as it was a present I thought why not, the markings are for 15th (Scottish) Division recce, again lightly weathered for summer in Normandy. I still have the crews to do and they are almost done on the tray, stowage is also on the cards but that can wait, I have six men for the 8.8cm gun and a driver for the Dingo, I don't normally bother with drivers but decided to pop him in this one. I am not keen on Rubicon crew figures for WWII I cannot get the impression of Ken (Barbie) dolls in uniform out of my mind. 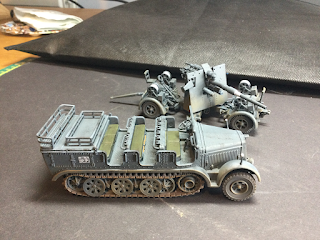 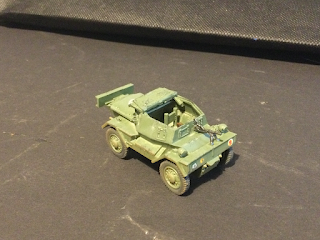 As you know I should be starting the Italian Wars in a few weeks, I had plans to use the lovely Pete's Flags for the troops, still do for some, but as I looked through the Helion books I found some characters who are not covered by Pete but that I wanted in my forces. Robert Stewart, Seigneur de Aubigny captain of the Scots Guard and John Stewart, Duke of Albany, I have had to use the latter's arms as a banner. Interestingly I also found out that Edmund de la Pole, the last Yorkist heir to the throne of England was killed at the battle of Pavia, and as a confirmed Yorkist supporter I found his arms and made a banner from them. I intend to spend some more time on my own banners.

At last, a film I thoroughly enjoyed and with a twist in the tail which was a complete surprise to me at least, you might work it out quicker, 'Old Henry' on NOW. Not a woman or woke message in sight, just a good story, well told and acted. 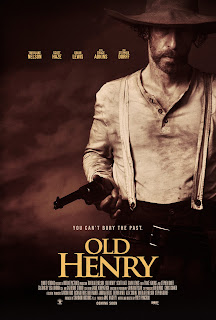 Not a lot of joy on the book front, I started James Holland's 'Brothers in Arms' after his superb 'Battle of Britain' and found once I had put it down I could not pick it up again. I just had to give up, I don't know what it was but it was not for me. On the other hand I got two books on the Fall of France in 1940, I have begun Alistair Horne's book 'To Lose a Battle' and was immediately drawn in, it is an old book now but I know I am in for a good read. 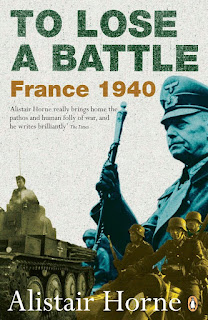 Posted by George Anderson at 11:40