This week found me in Vietnam in command of an M48 and two squads of Grunts in M113's on the left flank of an operation to sweep towards a river and bridge. Andy had the table ready when I got there, I was impressed, even more when he started laying out the figures, lovely little 20mm vehicles and troops, along with civilians, water buffalo's and various hooches. 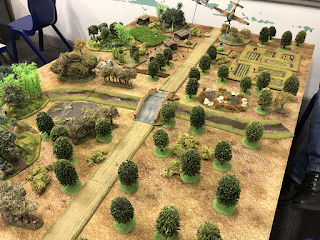 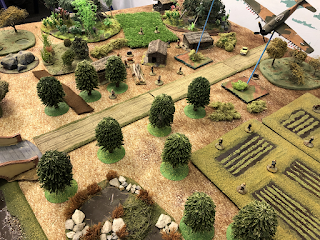 The game used Force on Force rules and again I was quite impressed by them, I think if the game had been any larger there might have been issues but the set up was perfect, Simon and I had never played before so relied a lot on Andy keeping the game running, which he did. I had a quick look at the books and I think we skimmed over a lot of the deep stuff but it suited us for a quick dabble in a new type of warfare. 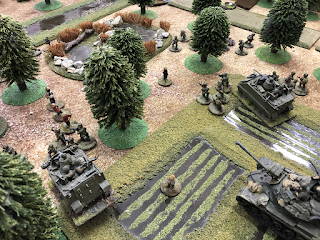 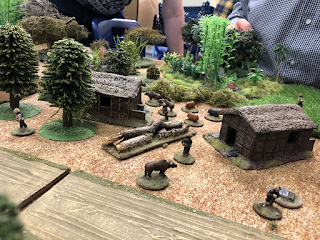 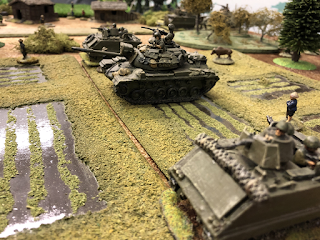 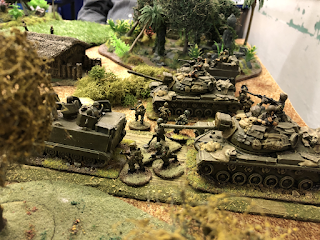 As I said above I took the left and as I drove through some paddy fields a bunch of VC popped up and took out one of my M113's, I had already dismounted my squads near the edge of the wood and took 'Charlie' under fire, I was determined to be aggressive. Simon on the right got into a firefight with some NVA regulars in a dense wooded area, he too quickly lost his transports and one of his tanks was none too keen to get any closer to the enemy. It proved very tough to capture the wood and casualties were high on both sides, the NVA fought like fanatics until the last man fell. 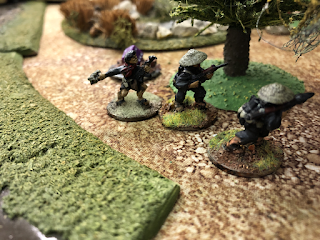 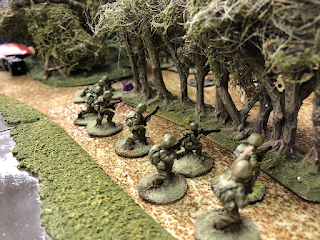 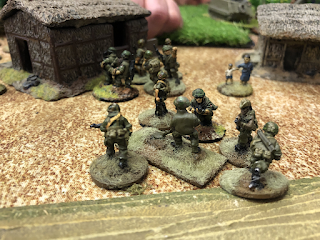 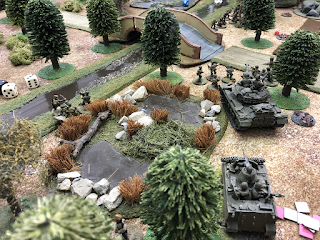 I was luckier and as the VC to my front proved less than competent I closed and shot them down, along with three poor civilians, capturing several wounded Cong who died shortly after. Simon's tank raced for the bridge to beat me to it but hit a mine and threw a track. At this point we called a halt and gave the Yanks the victory, there was still one NVA squad in the area but it was getting ready to pull out by using the tunnel system.

I really enjoyed the game being a Nam vet myself, does a holiday count? Although I like my 28mm WWII I am always glad to see Andy's 20mm pieces on the table, and he has a lot. I could really be tempted by this period, down boy. 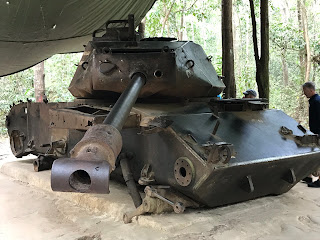 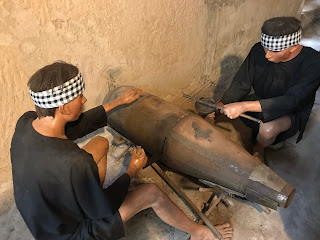 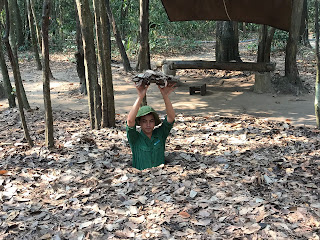 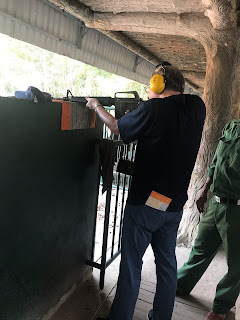 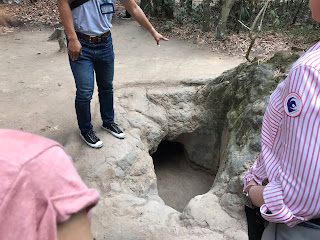 And so back to the Italian Wars, my latest pike blocks are Black Band Landsknechts fighting for the French I still have one more to complete but decided to take a break and paint the gun and crossbowmen before moving on more sharp sticks. When I first received the crossbows from The Assault Group I thought they looked a bit bland and quickly put them in the drawer. Once I had cleaned them up and added the crossbow I changed my mind, and once primed they really stood out, smaller than the chunky Foundry figures and more anatomically correct they really are nice additions, I have in fact now ordered up another eight to shield the second pike block when I get around to it. The gun and crew are simply lovely. I now have six gendarmes on the tray but have not had the time to do more than prime them at the moment, probably next week before I can get started on them. 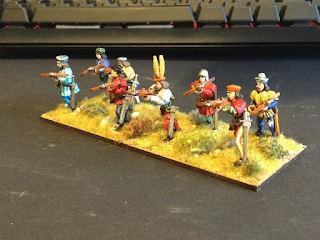 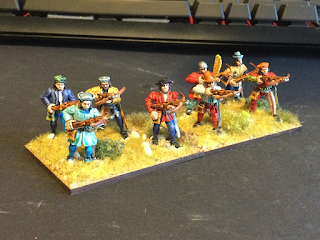 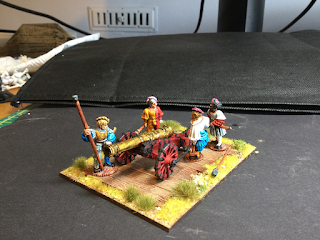 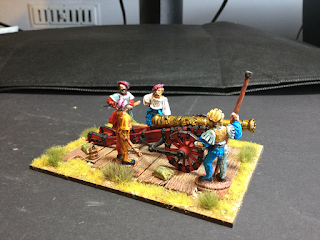 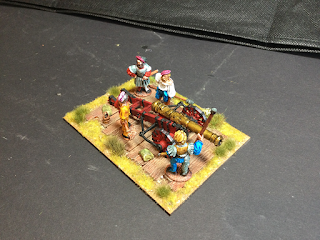 It looks like the sun has finally ventured north from that little corner of the south east, but of course no one is happy as it is very hot, we will probably roast for five days or so now. In expectation of nice weather the LMF has treated Mrs A. to a summer house for the garden, my star is in the ascendant for now. I didn't build it of course but I did help paint it, twenty two years we have been here and still the damn garden doesn't seem to meet the Memsahibs requirements, although she does do a lovely job keeping it. 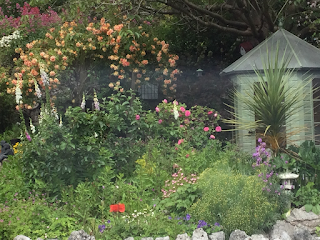 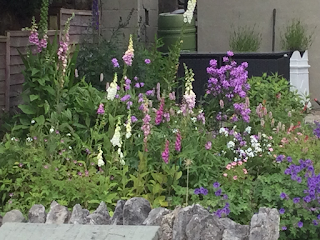 Maps continue to keep me busy, I have now had commissions from South Africa and the US alongside my normal Helion work, hence no painting this week or probably next. 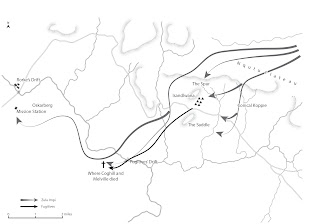 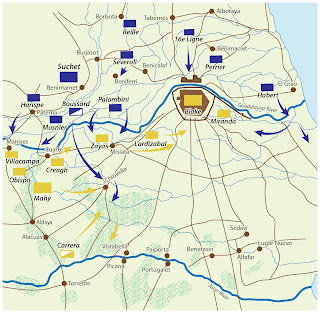 We have another large Napoleonic game in Grange this Sunday at the Gin Pig, more British this time as several of the guys have been painting like mad to add the redcoats to the collections. Black Powder continues to conquer the club, I will be taking part in Fran's ACW game on Tuesday with his 'Epic' range from Warlord Games. Right that is it for now, the sun is up and the great British public will be hammering at the door in fifteen minutes disturbing me from my real job of drawing maps.

Oh, my resignation is in and posted in the PO window, I was expecting a lynch mob "coming down here, taking our women, taking our jobs..." but I have had nothing but good wishes from villagers on the website, on reflection as only 5% of the population actually use the place most will not care two jots. Everyone received a timely piece of PO info today, in essence it was telling people not to bother taking their parcels to the local PO but instead get the postage online (it's cheaper!) and the postie will pick it up and even bring the label, why bother about your friendly, neighbourhood Subpostmaster's business going down the tubes. Mine is already in the pipes so no sweat there.

Posted by George Anderson at 08:55