Tempus Fugit as the Romans say, another week gone and still no sign of a real summer north of the Watford Gap.

It was Chain of Command for Simon and I, we chose the Flank Attack scenario and I was the attacker, originally I got 8 support points and Simon had 4, with the difference in our platoon strengths Simon got another 3 giving him 7, so I was expected to attack on a 1 to 1 basis. We had a talk about the points and in the end we agreed I would get 10 and Simon 7. I had a Heer platoon and spent nearly all my points on a StuH 42 and with my extra two took a second Senior Leader. Simon changed tack and brought a T-70 along with a MMG team.

I put two squads on my left flank and one on the right, this I decided to supplement with the tank, the Russians were all in one quarter of the table and everything except one squad was brought on to defend the area, I also quickly had all my men on the table ensconced in buildings. The defenders could have done with some fieldworks but nevertheless put up a brave fight until my tank turned up, this proved the king of the battlefield and Soviet casualties began to mount, the T-70 preferred to keep out of sight of the StuH. Simon did take advantage of a double move to surprise me by advancing on one of my Jump Off Points, a good move, but I had defenders right next to it and they eventually wiped out the brave Russians.


My tank was causing havoc and as the clock ticked down I brought my infantry out from cover and began to advance on the Soviet position. I was doing nicely until Simon killed one of my Senior Leaders and my morale took a -3 hit, however it was only a minor setback and as my tank continued to advance with impunity Simon called a halt. A German win.


We discussed that the Soviet list in the original rule book was not up to scratch and we needed to look more closely at the armies for the year we were playing, the Germans are not so bad but the Soviets need work. The support lists are not great either in that there are loads of options you will simply never be able to get your hands on, especially as a defender because you will never have the points available. I think the trick is to ditch the scenarios in the book and sort something out for yourself. The same problems do not rise so much in the mini-campaigns. Anyway that is work for another day.

I have completed my third pike block, Landsknechts of the 'Black Bands' in French Service led by the Duke of Suffolk killed at Pavia in 1525, I will be doing a second such pike block to either join these guys or fight on its own. Although I have the figures I am taking a 'rest' and painting up a gun and crossbownmen, these I cleaned up and primed today. I am becoming more comfortable painting these figures, my first pikes were Swiss and apart from the odd slash on the clothing I kept them plain albeit it coloured, these guys are real Landsknechts so I have made more of an effort with some of the clothing, I am keeping the real colourful stuff for Imperial Landsknechts. I have looked at many illustrations online and re-enactors along with tapestries from the period, and I don't buy into the more bizarre representations shown. 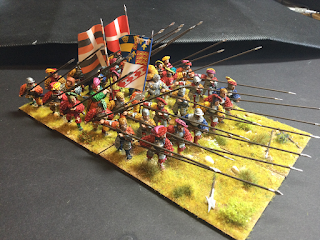 I think next week I am off to Vietnam at the club, Andy is running the game and it will be a nice change. It makes me remember sitting at a quiz on the rig and the question was what was the real name of the VC in the Vietnam war, the table next to us in a loud hush said "Charlie".

Much as I tried to hide from the Jubilee I was snookered as my granddaughter was here and I was to be on my best behaviour. We went to Morecambe on the Friday night for the beacon lighting only to find out I had a bigger gas ring on my cooker as the real beacon had not turned up, then the heavens opened and we got soaked, a hasty retreat was beat. Friday it was the local school grounds and maybe less than 10% of the village turned up for the festivities, yes the weather was not great but it was dry and some people had put a lot of effort in. Saturday and Carnforth had the same problem, again a fraction of the population turned up, we decided to head for Lancaster only to find out nothing at all was going on and the funfair had not turned up. A very poor show oop North hereabouts. I did manage to stay out of the way of the concert and pageant and only saw enough to confirm my innate miserableness as I retreated to my study.

Posted by George Anderson at 19:53