I am in hiding at the moment from everything Jubilee while my granddaughter and Evelyn remain glued to the television, I heard legendary waffle from Alan Titchmarsh talking about someone who was as close to a god as a human being could be, according to Al of course, so closed the door.

Back on terra firma the club game this week was Muskets and Tomahawks, an American force had set out to burn a blockhouse to the ground while the British and some locals tried to stop them, most of both forces were irregulars, even some sailors had turned up. Rob tried something different with the initiative cards this time, each side were dealt four cards to start the game, when one was used another took its place. This meant some difficult choices when you had a hand of cards only of use to the enemy but still had to play one on your turn, strangely this happened several times in the game with both sides reluctant to play and bring down hurt on their own troops.

I was in command of some Scots on the British far left, opposite me was some Indians, that will have to do as I have no idea what the modern term is now, a gun, some irregulars and a squad of regulars, I decided to be aggressive and sent my musket armed men over a creek and through some woods, my rifle armed squad I kept at a distance and started picking off gunners, this was incredibly successful. Stuart threw his Indians forward but I beat them off with heavy casualties, the survivors tried again later but were wiped out by my devils in skirts. 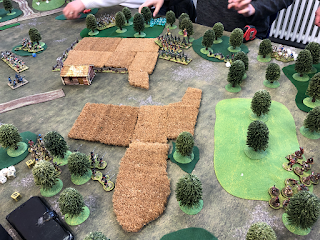 Elsewhere the American advance was piecemeal and looked like getting nowhere fast, eventually it did manage to get close to the objectives, a hut and the blockhouse, but there were still enough British to keep them from achieving anything. I had now wiped out the gunners and put enough casualties on Stuarts command that it could not advance and would surely fail the next morale check. I decided not to grab defeat from the jaws of victory and stood waiting in the woods until the enemy withdrew. My officer did get involved in a dual with his opposite number and sent the Frenchie packing, blood dripping from a serious wound.

So all in all a good night for me and the Jocks. Simon also presented me with a present, a dice dungeon for wayward dice, anyone would think I was superstitious about the little cubes, but I think I might need a bigger dungeon. 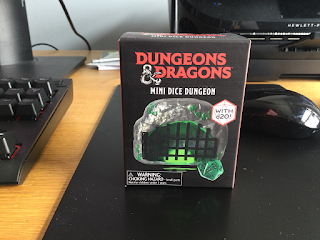 The Italian Wars project continues, I am now on to painting what I thought was going to be a French pike block led by Richard de la Pole, the last Plantagenet and known as the "White Rose", just as I had completed the middle ranks which contain the command figures I realised that he was in command of the Landsknecht mercenaries at the battle of Pavia, duh. My wargamers OCD kicked in and I cut the generic french flag off and replaced it with one more suitable for the 'Black Band' mercenaries. I am basing my armies for now around the battles of Biccoca and Pavia, this allows me quite a range of different troops, Germans, Spanish, Milanese, Venetian and Neapolitan to name a few. Once this pike block is finished I might move on to something else before starting on the second block as I have crossbows, cannon and cavalry waiting, the blocks can be used individually or brought together for a much larger unit. I shall have to consider getting some generals shortly. 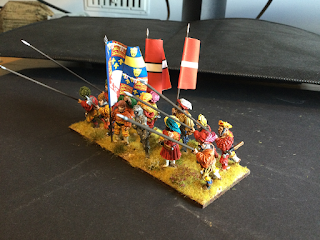 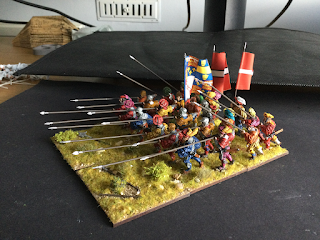 That's about it for now, I am taking the next four days very easy in training for retirement later in the year. I have caught up with all the priority mapping for now and will move on a 25 map project concerning General Suchet in Spain next.

Posted by George Anderson at 12:46