Last night I introduced Jimi to Chain of Command, he has a mainly British airborne force built for Bolt Action so there really was no problem using them for 'the other game'. I cannot remember now where I found it but there was a scenario in Wargames, Soldiers and Strategy 107 which involved an historical event where some Paras were involved in a fight with a kampfgruppe from SS-Unterfuhrerschule 'Arnheim'. The author gives the Germans a couple of old French Char B1 tanks, one of which was converted to a flammpanzer, I have a model for this hoping to use it in some Arnhem games but up until now, like many of my models, it has been parked in its box. I thought this would work better and have more flavour than the bog standard set ups in the rule book.

So, Jimi had two squads, a 6pdr anti-tank gun a 2" mortar and two lots of entrenchments, I am not sure whether he also had a sniper but as one did not turn up perhaps not. I had three squads and two tanks, one the flammpanzer, my supports were a tripod MMG, an adjutant and a medic, I had to push through the British defence and exit the table or cause the British to withdraw.

I spent some time explaining the preliminary phases before the game started along with the command dice rules. The area had a lot of woods and Jimi decided to set his line up along a road where his trenches and the hedgeline gave him two levels of cover, one squad and the AT gun near the crossroads and the second squad over on his far left. I brought a squad each on my far left and right and slowly advanced them through the woods, I decided to quickly bring on a tank and despite having my lovely flammpanzer ready to go went with the gun tank, I also simply brought it straight on so that Jimi could see how the anti-tank rules worked. Not as crazy as it sounds as his AP value was 7 and my armour was 6, so I had a decent chance of survival. The first round bounced off but the second shot knocked the tank out, no big deal, I had another one. 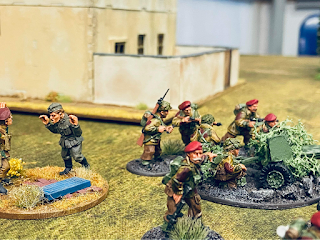 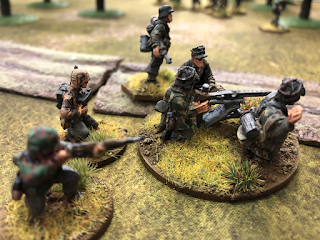 The infantry of both sides now entered into a prolonged fire fight which unlike previous games seemed to be in the main futile, I fired about 100 shots into the Paras on my right and managed over time to kill only 2! I got plenty of hits but could not convert them into kills or shock, I was most dischuffed. Despite this I still pushed my men forward on my right, surely the small Para squads would begin to suffer, but no, not before the bell tolled. With the fire fight raging I also could not spare a command die to bring on the flammpanzer.
So, a victory for Jimi and thankfully the scenario had turned out to be worth the effort, I would fight this again and hope for even average dice luck.

As I said I am back to painting, pikemen. I decided to see just how far I have gotten since starting out on the project back in late March, the army 'parade' contains 138 infantry, 12 cavalry and one gun so at this rate I should have enough to test the rules by the end of the year in a decent sized battle. I now have a small lead pile to work through so next up I have to get another order prepared. 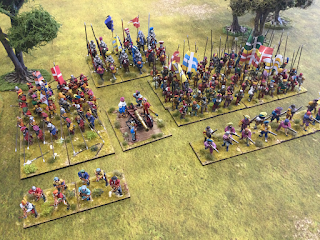 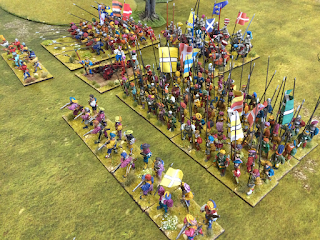 I have managed to get the map projects down to an acceptable level as well over the past week or so, of course this is usually the time I receive new ones. After this week there will be one large project involving Charles X of Sweden. 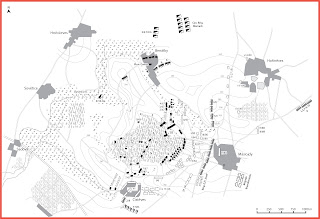 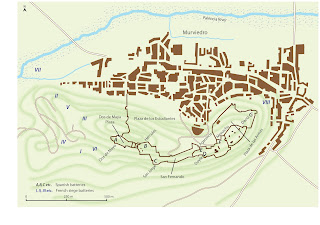 I am sitting here at the beginning of June with my fleece on as it is dull and cold in Warton with a cold wind and the promise of rain. And yet I read or hear every day that the planet is on track for Armageddon, actually I have been hearing it for over 30 years and still I cannot grow melons, pineapples or pau pau fruit in my supposedly by now scorched earth, even my tomatoes in the garden crave sunshine.

Posted by George Anderson at 13:25