I don't like Black Powder, there, said it. With the triumphant march of the rules and its variants at the club over the past six months or so this might smack of a touch of nose and face, but first some reports.

Two weeks ago I played in a Very British Civil War scenario when I sadly forgot to bring my phone so no pictures I'm afraid. There were Socialists, Government forces, Loyalists (me) and some aristocracy out for themselves, the Commies had taken possession of an antique armoured car with no engine from a local museum and were taking it somewhere by horse power to fix up. Everyone else were determined to stop them and take the metal beast for themselves. A very mixed up fight ensued which basically left only the Socialists standing with an empty road for their escape, the game looked very good with some lovely figures supplied by Rob and was simply a killing spree with the huge amount of casualties on all sides attesting to the bitter fighting.

And then came last night, Stewart Simon offered an ECW game with Pike and Shotte rules, we ended up with three of us playing and Stewart umpiring. It was a small battle from the rule supplement for the ECW, Stuart (2) and I were the Royalists attempting to get to Shrewsbury while Simon and his Parliamentarians blocked the road. Although we had the numbers the enemy were in a good defensive position and we had to navigate several fields surrounded by hedges, it was a small table and there was no room for maneuver so we decided just to go straight forward and trust in God and our righteous cause, big mistake in a wargame. 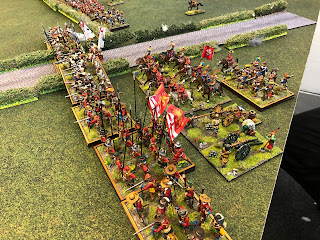 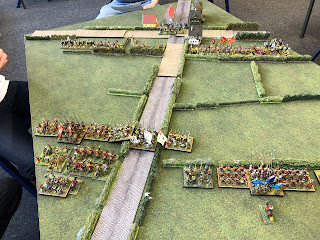 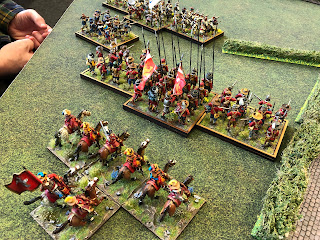 We got off to a shaky start but I managed to get my men closer to the enemy and behind a hedge, my idea being to unload a storm of lead into the defenders on my flank, after some time behind the hedge and several volleys later I had killed one unlucky fellow and scared off all the birds in the area. Stuart didn't have much better luck on my left and his cavalry were thrown back twice in lacklustre charges against enemy dragoons. It was now my turn to grasp the bull and in went some musketeers against an annoying gun and my cavalry swept forward with aplomb with infantry behind them in support. Their target, dragoons, evaded, so my boys put the anchors on and stopped half in and half out of a hedge, this caused a bottleneck as the dragoons came back and and again evaded the charge with my guys picking pieces of greenery out of their mouths, a shout went up for someone at the rear to pass a rule book forward. 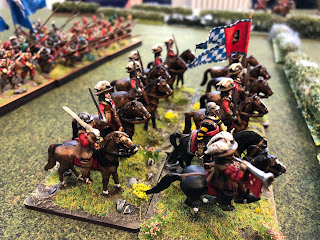 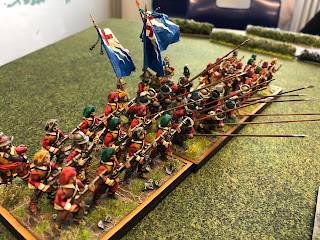 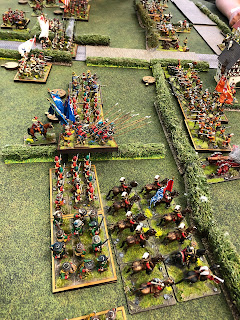 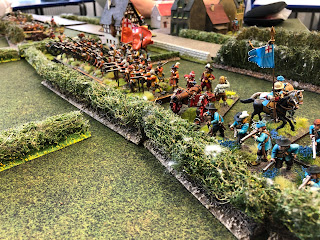 At the same time all along the line our troops began to disappear or stand rooted to the ground disordered, Stuart had one success but it was not enough, we ran out of steam and we retired to Ludlow with its Michelin starred restaurants, who needs Shrewsbury.

Before I go on I have to say what a beautiful collection of troops we had the pleasure to play with, Stewart (1) had started collecting them when he was about 13 or 14 and he won't mind me saying but he is no spring chicken now, however he was an excellent painter at such a young age as these troops showed. A real wargame army of the old school and a joy to see and play with.

What about Black Powder you say, well, the combat with my cavalry and the dragoons started me, the dragoons made the command throw to evade, they can then shoot with no penalty as my horse thunders in (I use the term loosely as you will see), bring up their horses, mount and retire unharmed, my boys seemingly then have to stop on the original position. In the next turn, yep, the dragoons can then move back to where they started, dismount and volley my guys at close range. My turn, and the whole cycle repeats, they evade and I can't pursue, no, not on my watch. Yes, I get that they are 'big game' rules and abstract but that now sounds more like an excuse than a reason for such nonsense as I have just described. I will still take part in Rob's excellent Napoleonic days in Grange as much for the company as the game but otherwise, I am done with them.

I am still forging ahead with the Renaissance, an artillery piece this time with an Italian crew, I have also just about finished my first general figure, Guillaume Gouffier de Bonnivet, Admiral of France, but you will have to wait for him although he is 90% complete. Next up is another crossbow unit, then some arquebusiers, all from The Assault Group before I get a look at their pikemen. 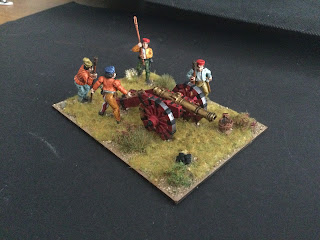 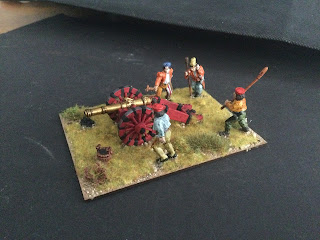 That's it for now, some sci-fi adventure with Simon next week.

Posted by George Anderson at 21:26