Kettle no one is running

A second run at Kettle Run, but this time using Johnny Reb 2 rules. Richard Ewell's division had been found by Joseph Hooker as both sides played hide and seek around Manassas Junction in August 1862, Ewell in position at Kettle Run was waiting for orders from Jackson to withdraw when the Federals attacked. I was Joe Hooker and intended to quickly put some hurt on the Rebs in the woods to my front and push them out, Fran, who was Ewell would be moving forward with his brigades to support those troops. As I built the terrain and set the table I realised Hooker had a tough fight on his hands. 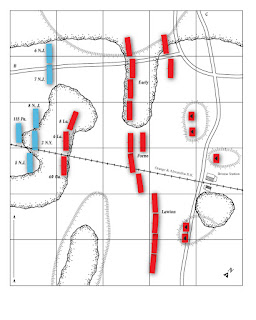 As the game kicked off the Reb artillery managed to get first blood as my men on the left in the open came under long range fire. I moved Carr's brigade forward to engage the Confederates in the wood and the first shots rang out. I noticed the whole Confederate line was now advancing towards me and my chance of winning the woods was getting tougher, I needed my reserves. Just as it looked like my flanks were going to be threatened Grover and Taylor turned up, the former on my right and the latter on my left, I had started to pull Carr's left flank towards the centre to reinforce the woods and give Taylor room to deploy. At first I had thought I would now move on the Confederate flanks and attempt to push them back, however things in the wood were not going well and I changed tack, I was not going to push the flanks but reinforce my troops in the wood.


A brutal firefight had now erupted in the woods and both sides were suffering yet not giving way, regiments which should have run seemed to be rooted to the spot, twice I had regiments (New Yorkers) down to one figure yet still trading close range fire with their enemies, the Rebs also had their moments and some Georgians caused me a lot of frustration. The Federal artillery now turned up and my gun line caused the Confederate right to withdraw into the shelter of the trees, I let them go. More and more regiments were sucked into the maelstrom which was Kettle Run woods, but again no one managed to gain an advantage. The Rebs still held the tree line and the Federals were still in contention.

After five hours Fran and I were as exhausted as our troops, there was at least a couple of more hours of combat left despite both sides being close to some major morale issues and the outcome was still in the balance. Fran had actually held the woods so had won his objective, however with the sheer intensity of the fighting, the fun and the trials and tribulations and being unable to continue he offered a draw which I was happy to take.

Once again JR had come up with the goods, the dice were overall very kind to us and in some instances caused shouts of joy and a grinding of teeth on the other side. Only one Reb commander was taken to the rear and one Federal received a crease on his brow. The game was also noticeable for the amount of punishment regiments took before running, I noted above two of mine down to one figure and one of them still managed a suicidal charge, you had to be there.

Just a quick note as I have another game on this afternoon, War and Conquest with my Dark Age armies. More anon.

If you see this woman phone the Canadian police. Where did I put that white flag. 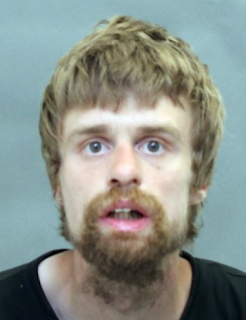 Posted by George Anderson at 12:29