The sun is shining, the morning haze being burned off in the distant fields and the ugly windmills standing proud, however there is frost on the cars and it is bleedin' cold in the 'ouse. Still to meet the neighbours although people are venturing out more often as we have had a few nice days recently and I have seen the occasional smile, there are high hopes of a nice summer, personally I shall take each day as it comes as the last good summer is slipping into folk memory. The neighbours across the road who enjoyed painting their own yellow lines outside their house to deter people parking have gone, there is a book in the waiting there.

Warton has a 'crag' and it is fairly famous in these here parts, it had a stone or bronze age site on it and it has been quarried for years to provide local limestone, I presume for building, or whatever purposes you use limestone for. People seem drawn to it and many walk their dogs twice a day on it, so watch your step. I don't see the attraction, yes you do get a nice view of the local area from the top and you can pick up wild garlic in basketfuls, is it worth it though? There was and may still be a nesting pair of Peregrine Falcons there and birdwatchers took turns watching the nest until the young birds hatched although I have not heard anyone talking about them for a while. One evening many years ago a lad plunged to his death off the face of the crag, a tragedy. However it turned out he and his mates were up there to steal the Peregrine eggs, they got drunk and he went out on his own and fell. Described by his family as a 'lovable rogue' he had what the Americans would call a 'rap sheet' as long as your arm including grievious bodily harm, robbery and burglary, I mention this because this week an elderly gentleman threw himself off the crag, you have to climb over a fence to manage this so the poor man must have been in desperate straits.

I went to a football match yesterday, the last time I suffered this torment was around 1975, Hibernian vs Hadjik Split and as you can tell the experience burned itself on my memory. I went to watch Morecambe (the Shrimps) vs Hartlepool United (the Monkey Hangers), both pretty much third rate teams but I promised to go with my old drinking buddy six months or so ago as long as I could get a pie at half-time, best pies in the league seemingly, so yesterday was D-Day. The ground was nowhere near full and we were entertained by the 'Shrimpettes' before the match started, a tannoy kept us informed of what was going on but all I heard was "waaa, waaaaaa, waa, waa, waaaaaa, waaaa, wa." Nearly everyone in each team was a young lad, all with pristine, strange haircuts, which wobbled not during the whole game.

Six minutes in and Morecambe were down 2-0! Aaaagh!, Come on you Shrimps, Ref! The Monkey Hangers at the other end of the stadium were happily singing what I can only conclude from the lad along from me giving them the finger, were robust football taunts which to me sounded like "waaaa, waa, waa, waaaa" but this time in tune. Morecambe get a goal in the next five minutes 2-1, exciting stuff, but at half-time it was 3-1, after this it was 3-2, then 4-2, somewhere in amongst that the Morecambe goalie was sent off. We left with three minutes to go to avoid the 'rush' and just as we got to the gate it ended 5-2! I am no expert but the football on display yesterday was frankly rubbish, especially Morecambe, and if you are wondering why Hartlepool are called the Monkey Hangers they strung up some monkeys during the Napoleonic Wars as French spies.

Were you as shocked as me when it was revealed by the leaked financial dealings of the Panamanian law firm that rich people hide their money away? No, neither was I, and let's face it if you had several million on tap would you pop it into Barclays and let the taxman get his hands on large wads of it, no, neither would I. What does sicken me and I didn't need leaked papers to inform me is when leaders of some of the poorest countries in the world siphon off money which they are not entitled to and have done nothing to earn stash it away for a rainy day while strutting around on the international stage when they are nothing better than robbers. 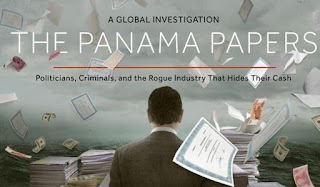 I found out that Tata Steel are only closing down their British plants while those in Europe are being left alone, for now at least. The green taxes heaped on the business community (I too pay extra) may have something to do with it while our EU neighbours march onwards without this level of restriction.

You know you are getting old when you do not understand how to add up or take away and your seven year old granddaughter shows you how, not for her 14+2+3=19, no, the calculation she wrote up looked like calculus for a science project, she got the same answer but I had no idea how she came to it and it took three times as long as my way. It did seem like way too much effort for something pretty simple, but what do I know. It does astonish me that my five year old granddaughter knows her way around an iPad and can sing all the words to Katy Perry's 'Roar', yes I do know who Katy Perry is.

Posted by George Anderson at 10:02