Club night and a game of Muskets and Tomahawks, it was sweltering last night and if I closed my eyes I could pretend to be in a cafe on the Mediterranean coast sipping wine and munching olives, but the dream didn't last long, thankfully the club was fairly cool. We weren't sure how many were going to play and in the end it was Simon and I against umpire Rob, we were the Americans, I had some Regulars while Simon led the Irregulars. We were told that we had to march to the sound of the guns and my own objective was to get to the ford beside the blockhouse with at least two thirds of my men standing. We were not sure what the blockhouse held but outside lining the fence were British regulars, Scots, who as the game progressed all seemed to be called George. 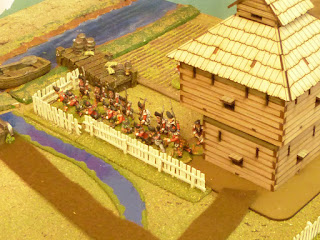 As the cards were dealt we could obviously see Indian and artillery cards so although there were none on the table I began to fear an ambush, there was indeed an ambush but thankfully it was Simon who walked into it. A blast of fire from the forest in front of his leading unit cut them down to under half strength and they ran for the rear. Soon after the Jocks in the woods made a run for their base as the Americans moved to outflank them, this proved a mistake and they were gunned down until only, yes, George remained, Simon had had his revenge and now took pot shots at the British line behind their defences. 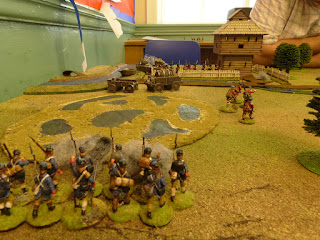 Meanwhile I was slowly moving forward at all times expecting to hear whooping coming from the woods either side of me, but the only enemy to show up were some Irregular woodsmen, I got the drop on them and they ran, they were pursued by my Irregulars and although I cut them down to three men always seemed to just make it to safety in the nick of time. 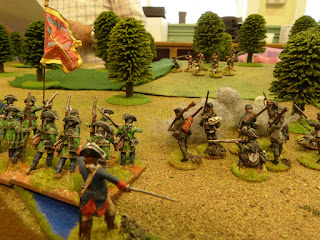 My Regulars meanwhile slowly made their way to the blockhouse and lent their firepower to killing the Scots, a sniper at the top of the blockhouse was more annoying than effective so we dismissed this threat. Sure enough a loud boom signalled the presence of a cannon in the blockhouse, but this too proved to be lacking in lethality, onwards we tramped. Around this time the civilians in the fort lost their will to continue the fight and made for the dock and safety using a nearby boat. 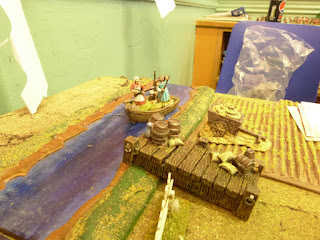 And at last there they were, right behind us, the Indians, however they proved to have arrived late and really could not interfere with the endgame at the blockhouse. They did however manage to beat my Irregulars to the draw and charge them, only to find they had charged to their doom, every one of them bit the dust, but I was left with only a few men. The mad war chief decided to charge and he actually beat my remaining guys despite being outnumbered 4-1. I think Simon managed to shoot him down as he rejoiced licking his wounds. 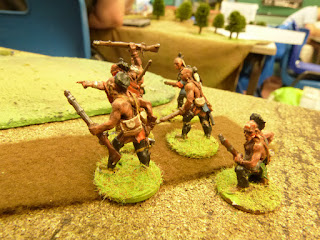 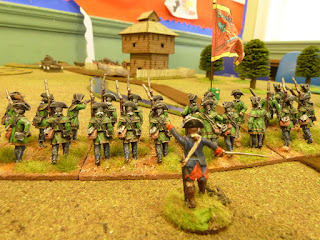 By now the forts defenders had been reduced to the last George while my men threw caution to the wind and charged the blockhouse, only two gunners and the commander I think remained, I offered quarter to the occupants of the second storey which they promptly accepted as did the Jocks Officer nearby having lost his command. 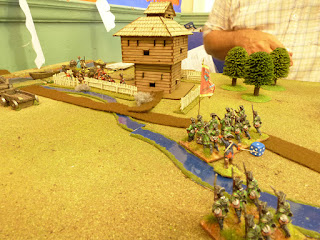 We had a bit of fun next as Simon tried to muscle in on the surrender ceremony as enemy swords were offered to me, complaining bitterly that his men had contributed most to the victory, he even tried to pull rank but as it turned out I outranked him so he had to sit on the sidelines, I even managed to cut him out of the photograph. You can just see the toe of his Lt. Col. on the right. 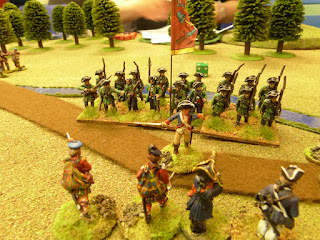 Terrific game and a lot of fun, my die rolling was dismal for shooting and melee, but my morale seems to have held when required, I did get a couple of really good volleys into the Jocks. Rob had given himself an uphill struggle to be honest, the Indians came on too late and his sniper and cannon in the blockhouse contributed nothing to the defence, the brave Scots died in rows.

Elsewhere there were three Bloodbowl games in progress, must be a new season perhaps, the usual boardgame and Sharpe Practice 2 on the Peninsular I think by the look of the buildings, it was Julian's British v Andy's French, I didn't catch much of this but it looked like the French were on the wrong end of things near the end. 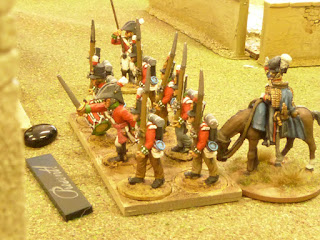 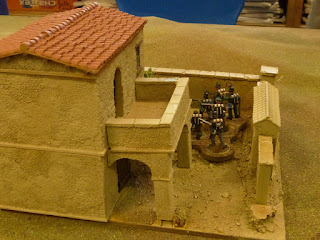 Posted by George Anderson at 13:57