As you know I am at a loose end at the moment, my wargame nest egg is dangerously low at the moment and will not meet my expectations, I blame it all on Brexit of course, you got to laugh, and I have just had an unwelcome email telling me I need to renew my licence for Adobe Illustrator which I use for cartography, well there goes those kubelwagens and jeeps. Hopefully that situation will end in a month or so with all the work I have piling up.

Anyway rather than play a solo game, which I should have done, I mucked around yesterday and decided to get around to putting some camo on the Panther. I took some of my camo netting and 'Germanised' it by adding some brown paint to the watered down PVA and this time I stuck some cut up lichen into the mix. I knew the look I was going for as I had been looking at some Panthers in Normandy. The lichen sank into the netting and needed bringing out, so I gave it some flock to represent fresh foliage added by the crew. I think I now have a battle worn tank on my hands.


I also got around to a job which has been on the backburner for some time, I rebased most of my Dux Brit troops on two customized bases made for me by Warbases so they can go back to the game if I ever convince someone to try it out with no hassle. I also took the characters off their 2p's and based them to fit with War and Conquest, I now have plenty of priests, musicians, champions and leaders for all my needs. 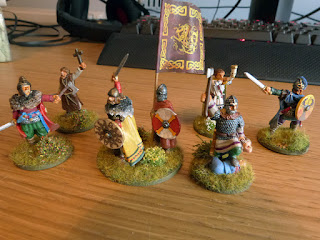 So what is left in the dark recesses of my mind, nothing sadly which does not involve an outlay of moolah, having said that I do have some WWII barricades on the way along with an MG42 team, the Germans can have two MMG's on the table in Bolt Action.

I now know how the victim of a snake feels when it is mesmerised, I found Tabletop Battles on YouTube hosted by a couple of Norwegian guys, Swien and Damon, they play a lot of Bolt Action along with Frostgrave and some Age of Sigmar, and I find myself watching whenever I have some spare time. I don't know why but I especially liked their visit to the UK, which took in North Star and Warlord Games along with a tournament, go figure. They have an enthusiasm for wargaming which is hard to ignore, they are also fighting their way through WWII in almost every theatre from 1939 to 1945, the aforementioned firms have been very kind to them, especially Warlord Games to enable them to do this. It is not everyone's cup of tea, but I like it.

I can't go without saying that at last we have a decent Spiderman, the kid in 'Captain America: Civil War' was brilliant, I am looking forward to seeing more, oh, and I loved Ant Man as well, two very nice surprises for me.

Posted by George Anderson at 20:02