We Don't Need No Steenkin' Batches

The title has always been one of my favourite movie lines said in a heavy, fake, Mexican drawl, it's from 'The Treasure of the Sierra Madre' another one of the wooden Mr. Bogart's movies, anyway I digress.

Dead Man's Hand at the club, a four way game so I went with a scenario we have already played and it went even better. Simon had the Outlaws and I took my favourite Mexicans led by 'The Spider', we had a couple of lookouts near the bank while four of our guys entered the building, the rest of our men were on either side of the bank in two saloons, hopefully not getting too tanked up before the action. 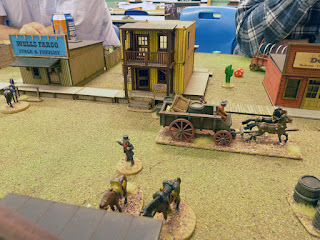 The raid had already been transmitted to the local Law and Sheriff Rob had deputised a local trail boss and his men (Stuart) to help apprehend the robbers, they also had a couple of men mixing with the citizens while the rest were in the jail house or again, another local drinking establishment, "Cowboys only friend."

As we entered the bank a rather nervous clerk let loose a shot before dropping the weapon in fear, a very angry Mexican took a flesh wound and clubbed the man to the ground. We now set upon the bank manager who refused to give up the combination to the safe and held out a fair time until persuaded otherwise (D3). The shot however had stirred a hornets nest and bullets began to fly across main street while the locals ran about like headless chickens getting in the way. My lookout took several hits and was forced into the back alley to recover, while the Lawmen took potshots with their rifles and glass shattered all around the Cowboys began to try and cross Main Street, all the while concentrating on Halloran's Place where my guys were holed up.


We got first blood and down went a lawman and cowboy, 'El Arana' was looking around nervously wondering how long it would take to get the damn gold, the Livery Stable and the horses looked a long way off and the Cowboys were in the way. Leaving a couple of snipers the Law also made their way behind the houses towards the other end of town. One of my guys hit the floorboards in Hallorans, I moved my boys out into the alley and got ready for a run to the stables.


We had the gold, I took one bag and the Outlaws took the other so we made our escape out the back door, a Mexican shooting the bank clerk on the way, however by this time the good guys had concentrated at the back of the General Store and we closed to point blank range to move them, bodies began to mount up. Despite trying to bring down the men carrying the gold the good guys failed to stop the rush and paid dearly. As the clock ticked down we declared a win for the baddies.

The scenario was a success, and we all had a good time, we had several laughs as shotguns missed with both barrels at short range, men fell from roofs and dived through windows, I was disappointed that the "The Spider" didn't hit anything all game despite almost standing next to his targets.

Imagine my joy when I drew a Mexican card entitiled "We don't need badges!
Posted by George Anderson at 08:00