Stewart turned up on Saturday morning for our planned wargame weekend, first up was several games of X-Wing then a War and Conquest game to refresh the rules for April (see below). X-Wing is undoubtedly Stewart's game and I like to think WAC is mine, pride cometh before a fall.

I ran four X-Wings in the first game as I had had success with this at the club and was quietly confidentish, I completely mucked things up and on one turn I did not even get a shot off, I was then taught how to really play the game, first blood to Stewart. In the second game I took two B-Wings, these fly like bricks, an X-Wing and an A-Wing, Stewart had the Hounds Tooth a big ugly monster of a ship, but one which never seems to have much success, especially at the club, another two ships escorted the beast. I got everything right this time and got a very good win destroying all the enemy, my first ever win against Stewart, honours even. For our final bash we both had Imperials and both had two Tie Defenders along with one more ship, I had an Aggressor and Stewart took an Interceptor. I was out of my depth and had a bit of bad luck, I thought I would get rid of the Interceptor first and got it down to three hull points, I hit it nine times more and not one shot got through! I quickly lost the plot and Stewart won 2/1, but I was happy with that I expected it to be 3/0. 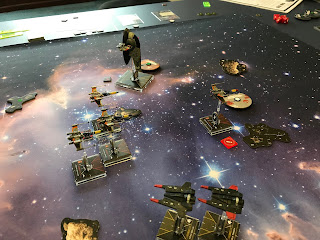 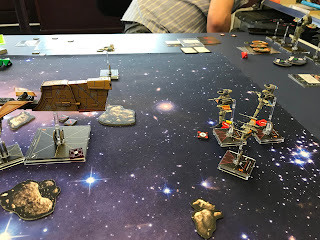 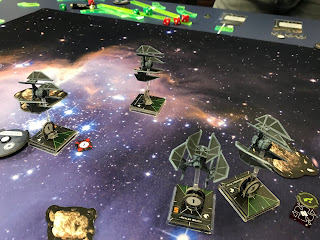 Sunday dawned and it was Saxon Heptarchy vs Carolingians, I took two elite Gedriht units, a group of Geoguth and one of Ceorls, I also took some cavalry as a reserve, then I took the Franks, yes, those Franks, but this time I gave them more men so that they would always have the chance of gaining the Warband bonus, I also gave them their own general and heavy throwing weapons, surely they would not let me down with all this lavished on them? The Carolingians had two elite units, some average troops, a large unit of cavalry and some unreliable types. We both had skirmishers, I had three units and Stewart had two.

Stewart had to deploy first and it was a typical battle line, I formed the same opposite, my intention was to break the Carolingian right and roll up the line while holding my own right back until they were forced into combat. Stewart moved his cavalry into skirmish and headed for the opposite flank, I was happy with this and moved my slingers behind the line to meet them, my right could be exposed by the cavalry. However I saw an excellent opportunity to ride down the enemy skirmishers opposite my cavalry, I covered them with my archers as they moved forward, before I could charge Stewart caught me out by charging the archers, a move which was unexpected and routed them, this meant the cavalry were now targets and they took enough casualties to rout, elsewhere that turn I had another unit of archers run, three surprising routs in one turn, not good. 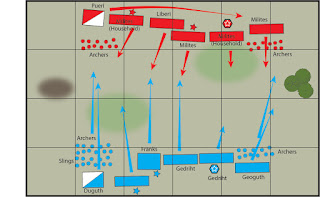 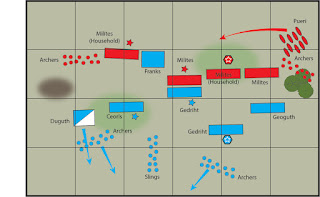 I now threw the Franks forward and sure enough my plan worked and they beat their foes and swept them away, Stewart had come off his hill so my right was now engaged as well, I was winning these combats, the Carolingian cavalry now turned and came back. I rallied my cavalry and set them towards the enemy, Stewart looked crestfallen. Another Carolingian unit ran and my young Geoguth held their opponents to a draw, it looked like it was all over. I then made a stupid move with the Franks, counting on them moving an elite unit, which they almost did, but in the round after my forces took a severe beating, so bad the tide turned and they failed to recover, as time passed more and more Saxons fled to the rear. It was my turn to look downhearted. Stewart had grabbed a splendid victory from the jaws of defeat, even my King was captured, a black day for the Heptarchy. When will I ever learn about those damn Franks, although they could say I have to shoulder most of the blame for mucking up their move, I threw away a good opportunity there. 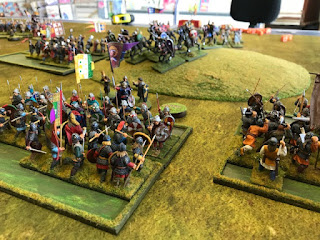 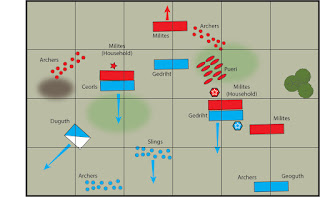 So a good two days fighting and Stewart grabbing the laurels and no doubt driving home reliving his glory. I had even used my new Saxon dice, I was never happy with the orange ones and they just felt wrong, these svelte blue and black dice are fine despite my loss. 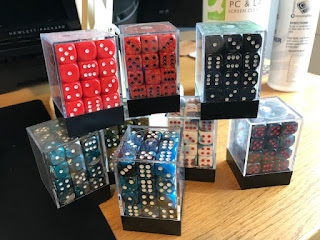 If you are a regular here you will know I went to a couple of War and Conquest events twice a year for a time, I like the game that much, sadly these events have not continued, for several reasons which I won't bore you with, so I decided to hold my own. I could easily fit four tables in to my Post Office but decided to go with three for a trial, this due to circumstances beyond my control has dwindled to two, no matter it is going ahead, two games on Saturday and one on Sunday.

I have been eBaying with some success recently and intend to do more once I return from holiday as decided to clear out stuff I never play with, most of my ACW ships have now gone and I have amassed enough for another couple of models for Bolt Action.
Posted by George Anderson at 18:38