We hadn't played Bolt Action since well before Christmas so we decided to have a go last night, for something different I came up with the bright suggestion of trying one of the scenarios in the Ostfront book which I knew Simon had. I find the scenarios in BA mostly rubbish, my main concern is that in any which have an attacker and a defender they have both sides with the same number of points which, as any military commander will tell you, is not on when you are the attacker.

This particular scenario had the Russians with the same number of points as the Germans, but they were already ensconced on the objectives (hills), they had a bunker and enough minefields and entrenchments to cover their entire front. The Germans could if they wanted use an outflanking manoeuvre, but as you have to tell the Russians, albeit not which side of the table you are coming from they can easily sit some reserves in the rear and wait for you. Julian and I decided that was not going to be in our plan, our plan was just to move forward and hope something went drastically wrong for the Russians. 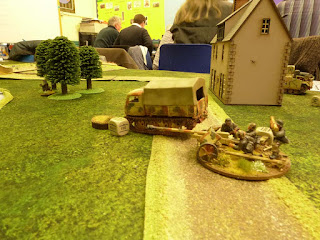 We plonked our anti-tank gun and the newly recruited StuG III in positions which gave them clear lines of fire, but we soon found we couldn't hit anything as the scores to do so were too high, also I was a bit miffed that my anti-tank gun tow refused to move throughout the game which cut the gun off from firing at anything to its right, not that it ever managed to damage anything with did cross its line of fire. 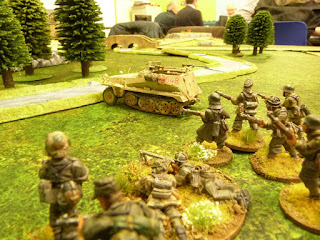 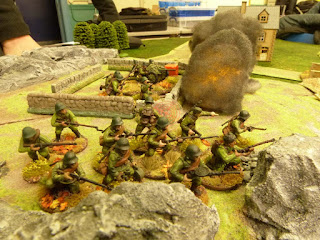 The ground in front of Julian was really too open to attempt an advance without dying, so I moved my guys towards the left hand hill with the bunker on it, we laid smoke which for a time stopped the enemy inside from spotting or firing. I managed to get a flamethrower within shooting distance of the defenders on the edge of the slope and burned them out, my boys then scrambled up on to the hill, however more Russians were heading their way, the objective would be contested, so no points there. What made it worse was the fact I had artillery ranged on the bunker but it failed to come in for three turns and just as I got troops on the hill, guess what, yes in it came and flattened the whole area.

I think we all realised by this time that the game was a bogie as we say across the border, Simon brought on his tank and both it and the StuG traded shots without either taking damage apart from a few paint chips. It had been a while since we played and it showed as we spent a good deal of time looking at the rules, we are going to keep going with BA and will play again next week but with something we know gives a good game.

Simon brought out his KV1 tank which he has just weathered, and very nice it is too, Julian brought some of his German troops to show us, not enough for the game but extremely well painted, both Simon and Julian have some lovely troops for WWII. I look forward to fighting those Germans with my British. 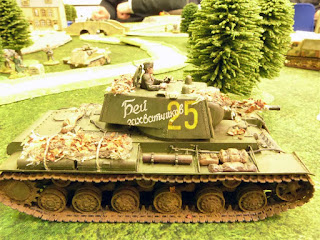 Elsewhere we had some role playing, a boardgame and a Steampunk type game with flying battleships, this seemed to go down very well if the laughter was anything to go by. 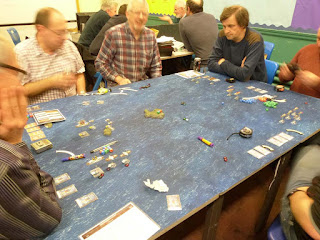 Posted by George Anderson at 14:49