Rubbish morning, not so cold but it is wet and damp, just generally miserable with that horrible watery sun away in the distance which has no warmth in it. Not everyone is moving away from me, we have a new neighbour renting next door, it is a popular hobby here on the edge of the Lakes, there are a good few houses being rented in the village, several near me with another being renovated to a very high standard a few doors up for exactly the same thing.

How is it all these so called celebrities all have a charity on their CV. To kill some time last night I watched the very aptly named Pointless Celebrities and as usual only recognised one or two, but no matter what the show they are all asked which of their charities the money is going to, are they given a choice before they go on. Most of us will pop something in a tin or box but we don't 'have' a charity, I suspect neither do a lot of the pointless ones. Wouldn't it be refreshing if when asked they said "I don't believe in charities with their overpaid executives and expensive headquarters so I will be keeping the money Alexander and giving a pound to that old dear at Asda."

Isn't Donald Trump a breath of fresh air, no don't throw anything at your screen. Of course I wouldn't have him for dinner but I cannot help but wonder what he is doing wrong so far. He has warned US companies not to go abroad for cheap labour, he has punctured the ego of the Climate Change Fascists and he wants to stop what, over the years has become millions of people coming into his country illegally. I saw one woman on the news who had been in America illegally for twenty years giving the new administration stick, in black and white that is simply, eh, illegal. You may have missed this on the news the other night, but the bust of Churchill is back in the White House and Donald managed a quick jab by pointing it out. Only one president removed it since it was installed. Scotland, Trump, Labour, Brexit, Whingers, Moaners, I cannot ever remember politics being as exciting as it is now. 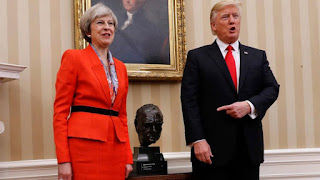 Tell me again what the women's march sorted out, if you listened to some of the comments they were so disparate I don't think they even knew themselves what they were marching for. Let me see, no, Donald is still there, hope you enjoyed the day out ladies.


Scotland, OK, when is someone going to put wee Jimmy Krankie in her place, you are merely the leader of a devolved government hen, you are not a world leader, you cannot do separate deals, you cannot sit at the big table. Haud yer wheesht. 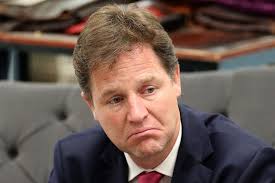 Were you fighting back the tears as Gina Miller explained her one woman fight to uphold the law of the land against all the odds. Gina love even with your money and success you cannot get QC's to fight your case unless you throw shed loads of moolah at them, and you got that money from interested third parties not from your piggy bank. You were never alone. It's a pity she didn't put her energies into the government stealing my wife's pension which means a lot more to her and the women of this country than a vote on Brexit. 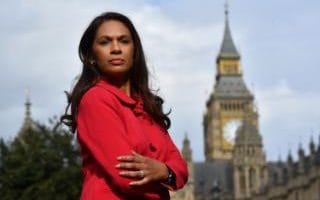 This weeks groveller to the twittersphere is Rob Page, when his team, Northampton Town got beat 5-0 by Bristol Rovers he said watching the match was like watching "men against girls". Now having been beat like that the description was completely called for. It is the reason why women are not in the Football League, or whatever it is called, it is also why they do not play men at their own game in tennis and most other sports, because despite the odd anomaly, they will get beat. But of course it was sexist and although true he was 'forced' to apologise on social media, grow a pair for heavens sake, and your team obviously are as bad as you say.


Are you getting fed up with your food? We have had all the scares about what went into stuff over the years but no one is saying what is now being taken out. All of a sudden Rowntrees Fruit Pastilles are not as moreish as the were, Plain Salted Crisps are bland cardboard, I would like to see just how thin Walkers can get those by the way, Cadbury's delicious chocolate is now but a dream (but it is halal now). And I want someone to agree with me that Milky Way is now a completely different creature. Stop taking the salt and sugar out, I am an adult, I will make my own mind up, I have given up fizzy drinks but I want the odd pastille to taste like a pastille, a Ritz cracker never hurt anyone. Cooking programmes are the same, use lo-fat this, unsalted butter, meh.

Oh, I almost forgot the human interest story. We sell tickets for various village societies and we get people taking the hump because they cannot put their £3 quiz ticket for the village hall on their card. Yesterday a woman came in for a Gardening Club membership, not with the £6 fee of course but with a £20 note, as they all do. Then as she is leaving she slides the old membership card across the desk, "Can I give you that?" "No you can't, there's a bin outside".