It was the French Hans.

Bolt Action at the club last night and as usual I sat down and sorted a list out an hour before I left the house, I was up against Simon's Russians and he always turns up with a sniper, flamethrower and a tank, usually a nicely painted up KV1. I decided therefore I would try something different and went for an all infantry force carrying their own anti-tank weapons and several in each squad with the new assault rifles, I wanted to put some hurt on the large Russian squads. I thought we had parted last week agreeing 800 points but Simon had brought 500, oops, a rethink was required, well not really but I had to lose some of my troops. I threw away the assault rifles, the panzerschreck (damn) and a halftrack. I therefore came to the field of battle with four squads of grenadiers with panzerfausts, end of. I faced three Russian squads and the KV1. 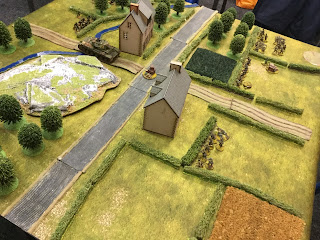 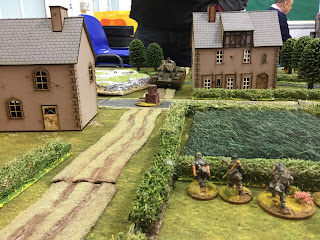 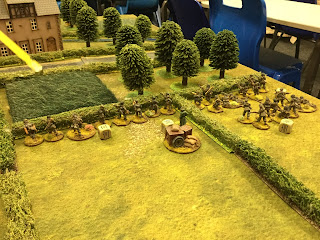 The terrain was more like Normandy than the Russian steppe, we are going to have to look at this in future, so I was quite happy to take advantage of all the cover to get close to the tank and use my numerical advantage to kill squads, that was the plan. We had the usual three objectives, one each and one in the middle. I moved one squad towards the crossroads and the other three advanced on my right. 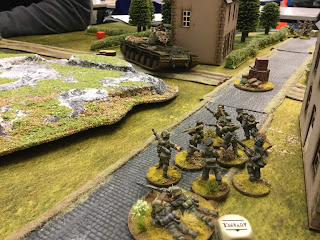 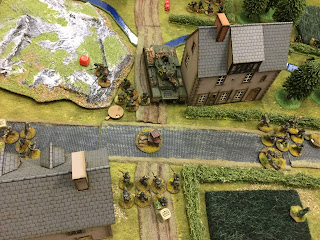 I got my chance to shoot at the tank, I pushed forward the crossroads squad and loosed off two panzerfausts, dink, bang, but as the smoke cleared it was obvious the tank had not been penetrated, my squad was now in  trouble. On the right I moved up and sure enough as I hoped I caught one Russian squad and wiped it out in a couple of turns. Once again I got a shot at the tank, dink, now all these were good shots, all on the flank of the beast but only one panzerfaust had gone off so far. 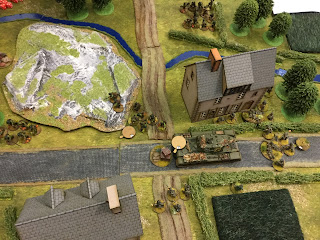 As turn six neared Simon had moved a squad up to the crossroads where it took a lot of pins but held its ground or rather hugged the ground, the tank rumbled closer to my right flank and I got another opportunity to fire two more panzerfausts at point blank range, dink, dink again. The game ended there with the crossroads contested, we were left with a pile of 'what ifs' but time was up. 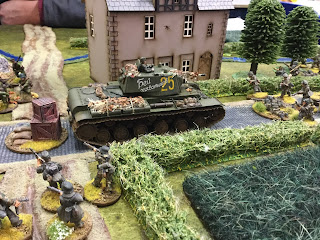 I was very pleased with the way my infantry had performed and with maybe another couple of turns I could have finished off a second Soviet squad, but I only had one panzerfaust left to nobble the tank, I would then have had to assault it, a dodgy proposition. Once again in this game the -2 for Down slowed the action and made hitting a target very difficult, the tank machine guns for instance proved almost useless if I got the opportunity to hit the dirt, so the beast was really no threat at all. I think if you play against a regular opponent and both agree to tweeks in the rules you would get an even better game out of Bolt Action. Anyway, I hope to get a  game soon against Julian's Italians with my British, Julian has also just invested in 'Gangs of Rome' so I will get a chance to play that as well in the coming weeks.

Next week it will be X-Wing and I hope at last to get a home game against Kevin at War and Conquest, real life has conspired against us this month.

Oh, and why are the French getting the blame, well no doubt some had sabotaged my particular consignment of panzerfausts on the factory floor.
Posted by George Anderson at 10:58