Too Much To Chew

Bitterly cold night last night to go to the club, sleet on the car and a biting wind. We had organised a four man game of Dead Man's Hand which had to be modified due to the arrival of a couple of guys with nothing to do. We amended the scenario for six gangs, three Law and three Baddies, the Law had to get two prisoners from Julian's magnificent railway station to the jail at the other end of town, we, the baddies, had to stop this and free the prisoners. 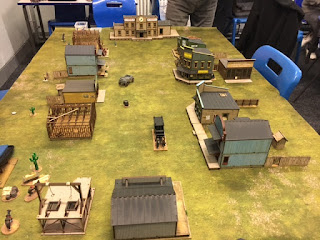 I had the Mexicans again, I never learn, and was between one of the posse's and the jail, I set up to hopefully stop them in their tracks, however a rifle shot from the jail forced me to move further into the alley (Colorado and Stumpy were in the jail according to Rob, Rio Bravo, geddit?) A very brave lawman from the jail tried to sneak up behind me and I let loose a hail of lead at point blank range but hit nothing! I did bring him down the next turn but I also lost my head honcho doing so. 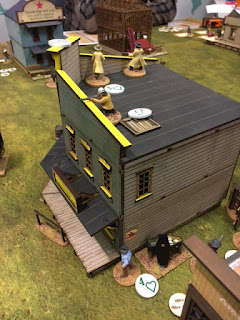 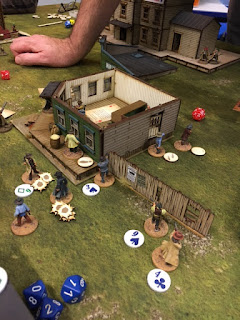 I was now receiving fire from the advancing posse and continued to lose men while inflicting almost no damage, I really must change my ammo supplier for the Mexicans. Cut down to only a couple of Banditos my boys got out of Dodge. 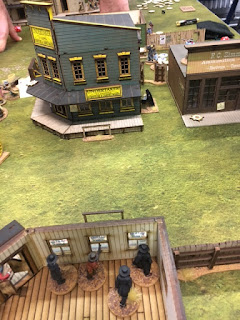 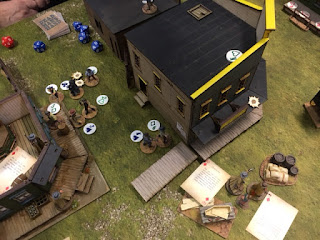 On the other side of main street the Law found themselves up against two groups of bad guys and it looked for a time they would be overwhelmed, a small group from the jail tried to intervene but were too slow. A hectic run for safety commenced with lead flying everywhere but on target. Simon's Desperado's made heroic efforts to release their man and were foiled at the last moment by Julian putting a bullet in his head. 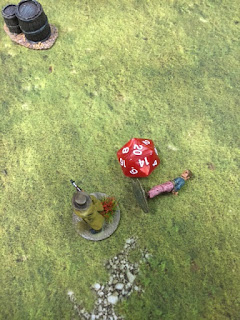 According to the Law they had won, but as it was my game I declared that the murder of the prisoner had shown the dark side of law enforcement and therefore the game was a draw. Not a bad game but the addition of two extra players slowed it down too much, this would have been fine for an afternoon bash but not a club game given that time is precious. Lesson learned. Julian had tarted up his 4Ground buildings and done an excellent job, I shall have to follow suit when I get the time.

Just after Christmas it was my sons 40th birthday, we got him some Eddie Cochrane memorabilia but my wife insisted I paint up a Robert the Bruce figure as I had bitterly disappointed him when I sold my Scots army a year or so back. Graham can play a tune but not a wargame was my reply, it fell on deaf ears as did my insistence that model soldiers do not come in 200mm scale on a horse just like the statue at Bannockburn and no matter what she said it was not going to happen. I did however find a 54mm (that's normal love) figure and painted it up for him. 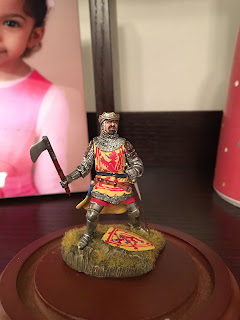 I have at last finished my third phalanx, it was way behind schedule with the Festive Season and then my manflu, but I completed it this morning at around 0730 hrs, it was weighing on my mind. I was going to move on the fourth and last phalanx but have decided to have some fun and am going to paint up my initiative markers and rally point and possibly some support troops I have on the way before the heavy stuff. I was at a loss as to what to use but settled eventually on Greek Gods which I got from Wargames Foundry, they arrived today and are very nice. 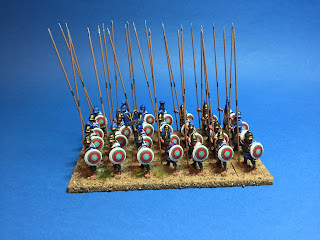 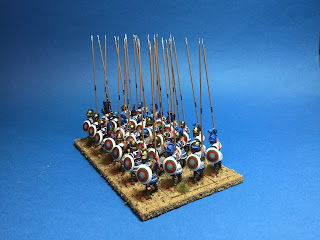 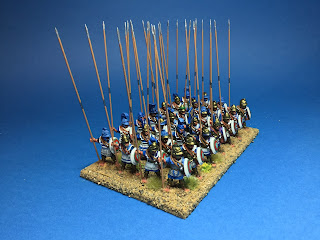 Posted by George Anderson at 19:49