The missus left yesterday and due to the strikes and rail closures had a tiresome journey to London but got there eventually, I am hoping I do not run into the same problems next Friday. Not having had a wargame now since the middle of December I organised one with Kevin this afternoon, he has had his own problems with the great British workman so didn't get a chance to put his usual thoughts into his army. Therefore I decided to choose a Dark Age scenario from my booklet and went for Winwaed, this battle was the last battle of the great pagan Mercian king Penda, he had once again launched a large raid into Northumbrian territory but had accepted gold to go home. The man who paid Penda off, Oswiu king of Bernicia, now decided to follow him and bring him to battle, perhaps he just wanted his money back. The upshot was that as the two forces met one of Penda's allies kept marching and another, a relative of Oswiu may simply have not fought at all.


I set up both forces opposite each other, some of the Bernician units were slightly larger than the Mercians also they had two units in reserve, the Mercians had one. Across the Cock Beck, a stream in flood due to a rainstorm, stood Aethelwald Oswiu's relative and dubious ally of Penda, a die throw each turn from turn three would show Aethelwald's intentions, 1-3 he would remain loyal to Penda, 8-10 he would throw his lot in with Oswiu, anything else showed he was still unsure. 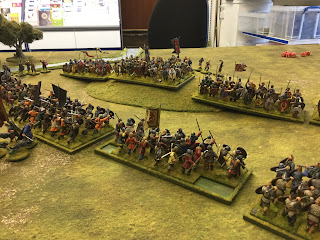 Kevin chose to take Penda's forces so I was left with Oswiu, I decided to take the battle to Penda as quick as possible in case Aethelwald became a threat later, I left my cavalry reserve in the rear for just such a possibility, I also had an extra infantry unit which I brought up behind the battle line hopefully ready to deploy where needed. Kevin moved his cavalry to threaten my right flank which caused me to slow this attack down, however I pushed forward with the rest of the army. Very quickly I lost my rightmost unit while another on that flank went charging ahead into the enemy line, this left one unit standing (my Franks, and we know their reputation) not really what I wanted, Oswiu looked around in despair. I was forced to commit the Franks before the Mercian cavalry could flank them while at the same time Kevin threw in several charges on my left, things looked decidedly fragile. It was at this juncture that Aethelwald decided to indeed stick by his promise and began to move his troops across the Cock Beck to Penda's aid.

Wait, the Franks are fighting and quickly defeat and disperse their foes, at the same time the Red Dog troops, despite being slaughtered stood their ground, things began to look better. The Mercian counterattack turned into a disaster as Penda's bodyguard died around the body of their king unable to defeat Oswiu's household troops, as the king fell more Mercians fled the field. Aethelwald, still struggling across the raging stream took all this in through the murk and advanced no further. The Bernicians controlled the field.

A good game and typical Dark Age struggle with no quarter given. Lady Luck had deserted Penda after his first small victories, despite being uphill of the enemy and getting their charges in first his men failed to turn these into more victories while the Bernicians fought far better and managed to disperse most of the enemy army. Aethelwald could have made a difference but took time to make his mind up and by then the Bernicians had troops to spare to meet him as he crossed the Beck.
Posted by George Anderson at 19:19