Thunder in the Ozarks

Recently a lad from Spain got in touch with the club on Facebook to say he is moving to the area and would like to pop in when he is settled. I found out he has actually moved to Carnforth just down the road, so I got in touch and offered a game. Julian has played Johnny Reb before so I decided to set up a small scenario from one of my booklets, it would be nice to get back to the Civil War. I set up the battle of Elkhorn Tavern, an early war clash with lots of poor weapons and green troops, a real bunch of amateurs doing their best for the cause on both sides with the fate of Missouri in their hands. 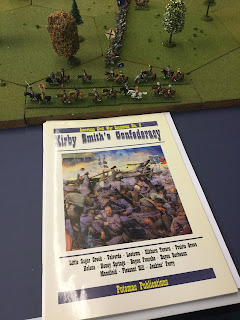 Julian duly turned up and we had a chin wag for a time, his main wargaming thing is L'Art de le Guerre of which I know nothing, he goes to and organises competitions and has done so all over Europe while living in Spain.

As he was sitting next to the Union side of the table he took the Federals and I took the Rebs. At first glance it looks like the Union are heavily outnumbered, which they are and widely dispersed while the Confederates have proper lines of battle and there are a lot more of them and they are bearing down on the slender Union line. The Rebs had loads of artillery at this battle but it was caught in a traffic jam on the Telegraph Road, the only decent thoroughfare in the area, and apart from the batteries deployed the rest took no part in the action so they are not there. 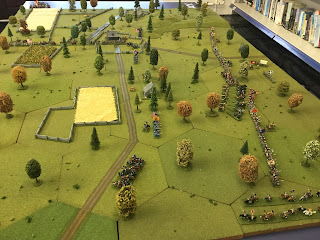 I had to capture the crossroads around Elkhorn Tavern and tentatively advanced my right while urging my left, the Missouri State Guard, to hot foot across the battlefield in a large outflanking movement. Julian withdrew his men skillfully and soon had several guns protecting the Tavern area with his infantry beginning to form a decent line as reserves arrived. This is what caused me to slow down on the right, many of the Federals had rifle muskets while my army struggled with smoothbores so I expected heavy casualties and my right hand brigade was rather small so I treated it with respect. 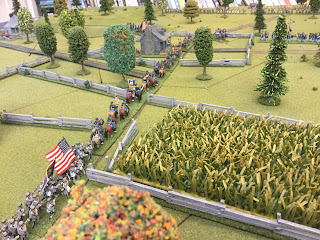 I did make an attempt to advance on the Tavern but a large regiment failed its morale and headed for the rear, I got them back but they had ruined my plan. Julian was planning to put some pressure on my right so I sent a cavalry regiment that way but they were going to take time to get there. The Guard slowly moved on but the Federal line was beginning to take shape, the terrain was against me and I cursed and urged them on. Eventually I got my line up and my artillery into a position where they could see the enemy through the trees and we traded shots, the Union having the better of the exchanges.

I had to make a move and charged my right hand brigade in against the Union gun line while one of the regiments was in turn hit by cavalry, the rest of my line I moved up to close range where my smoothbores would be of more use and managed to do this without losing too many men. My boys swept away the Union artillery and held off the cavalry, a spectacular achievement by the small regiments, however there were still Union reinforcements arriving so holding the ground would prove difficult. The crises was almost upon us, yes you guessed it, we had run out of time, I had not factored in the pre battle pleasantries and chat as the game progressed or the fact I was a bit rusty with the rules and Julian more so, oh and missus wanted to get the evening meal on the go, normally I am prepared to starve until the game is over but I slipped up here.


Julian said he was going to charge his whole line in the next move so we took twenty minutes to work out the charges in a very quick manner to see what might have happened,  well I lost a few Guard regiments so we now both had a hole in our centres. Looking at the debacle I think my guns may have held off their chargers with canister while the very small reserve regiment may have stopped some pursuers, but that was very much speculation. My troops around the Tavern would have had a hard time holding on but would at least have kept the Union reserves busy. There was at least a couple of hours play left in the game unless one side completely lost it but we did not have the time to find out, a real shame. I was happy though the way the scenario played. I had hoped to run a campaign this year based on Pea Ridge, I need four generals but so far can only find one interested who can commit.

I have a big week coming up wargaming wise, I am at Kevin's this afternoon helping him put together a large block game dealing with the Eastern Front in WWII, then X-Wing tomorrow at the club, War and Conquest on Thursday then L'Art de le Guerre on Saturday, it being only fair to play Julian's game as he played mine.

On the Sunday I am off to York and Vapnartak where I have a fairly large shopping list but the items are all fairly small, I also have to pick up some maps from one of Helion's commissioning editors who will be there.
Posted by George Anderson at 10:38