While at FIASCO Ryan and I sorted out a game for last night, he has a large plastic Successor army but it remains largely unpainted so I offered mine for the game. This meant of course that I would bring the Twelfth, it has been about a month since the Legion saw action, maybe a bit longer so it would be nice to get them back on the field of glory.

It was a small game at 2,000 points so we could get a result in the time allotted, Ryan took two pike Phalanxes, a Galatian warband and line cataphracts supported by some Thureophoroi, skirmishers and a bolt shooter, he closed the terrain down a tad with a wood on his left while the other flank had a small hut. I took two Legionary cohorts, one normal and one recruits, well supported by Auxiliary troops, infantry, light infantry, archers and horse archers, I also took a bolt shooter just in case an elephant or two turned up, I also took the Contari, hopefully to keep any cataphracts busy. 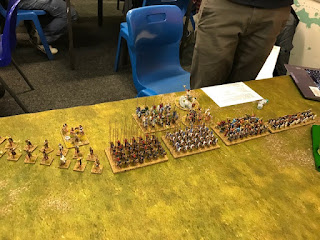 I advanced first and climbed the small hill in my centre, I sent the light infantry to worry Ryan's left flank while I set up my archers to shoot at anything approaching the Auxiliary infantry, I sent the cavalry against his right with the intention of swinging around the flank, hopefully giving the Seleucid cavalry something to think about.

It quickly became apparent that the cataphracts were going to be used against my centre, so I held the Contari back, just in case of disaster, I sent the horse archers into the enemy skirmishers, wrong move, I would have been better shooting them to death as the rabble fought them to a standstill. A phalanx now charged into Cohort II, the lads held for a bit but numbers were against them, the cataphracts crashed into Cohort I, the boys held under the gaze of the Legate. Meanwhile the Galatians were suffering horribly from javelins and arrows from the Auxiliaries, so much so that when they did charge in they were quickly beaten, routed and dispersed. The Thureophoroi fled so as not be charged in the flank, they were quickly followed by my light infantry who began whittling them down, this was not war, this was murder.


Cohort I was now charged by the second phalanx, the tide turned and the advantage went to Rome, the Seleucid phalanx which had routed Cohort II was now taken in the flank by the Contari, more Roman troops now bore down on the centre, shortly after Seleucid morale hit the floor, it was all over. A good fight but once again the quality of the Roman support along with the fighting ability of the Legionaries on the hill ensured a Roman victory. The hill was crucial to me and the weight of my missile troops meant the Seleucids had to come forward or die where they stood. It did not help that Ryan had dreadful dice luck for the first part of the battle, it picked up then left him again, the final straw was the cataphracts routing and taking a nearby phalanx with them.
Posted by George Anderson at 11:42