Victory and Humbled all in one go

Yes the nights are fair drawing in and they take an effort to march out in, nonetheless having heard nothing from Rob (he is alive and well) Simon and I went for War and Conquest, a small 2,000 point game.

Simon likes Romans so I took the Seleucids, I managed a fair little army although I was missing flank supports but I made up for this with light troops, I had an idea Simon would go for a core of heavy infantry. He did indeed go for heavy infantry, three cohorts backed up by cataphracts, artillery and horse archers. I had two pikes and one mercenary hoplite supported by my cataphracts, an elephant and skirmishers.

As usual I kept Nelly out of the way for the first few moves while shooting up the horse archers and advancing my pikes. I very quickly overwhelmed the Roman left and then did the same to the right, this left two cohorts on their own and Simon handed over his sword. Simon doesn't play WAC very often and Ancient armies take time to learn unlike the Dark Age rabble, the Romans were a bit top heavy and could have done with a better mix of troops, especially Auxiliary infantry, but there you go. What about the new Seleucid dice I hear you say, yes, they were splendid, no worries there, also it helped that Simon did not have last weeks luck with him. I am now determined to swap out the Saxon dice.


Work on the Boulangerie goes slowly, the main building is finished, I did want to put some 'glass' windows in it but as usual had put some plastic aside but now cannot find it, I will keep my eyes open. I am working on the back yard at the moment and when that is complete I will base the building and flock it. 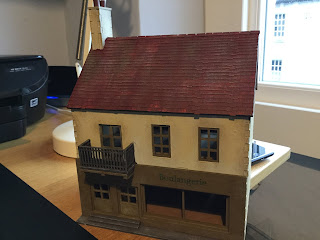 I have been working on the first map of the upcoming AWI atlas over the past few nights, it is about 95% complete, only 117 to go. 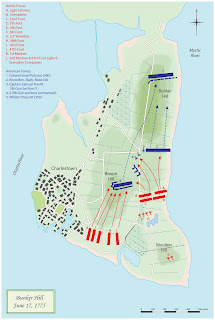 I ordered up a new drawing display a few days ago having had a hankering for a new shiny toy for the past year, I leapt in with two feet as usual. I received said machine yesterday and could not wait until the weekend to try it out. I spent three hours or more putting it all together, power, monitors, settings etc. only to find that sadly it is not for me. My drawings at the moment are mainly 'technical' while the machine is really for graphic artists, I am not one of those therefore it quickly became apparent that my workload would slow right down using it. So I have had to bite the bullet and send it back. It came with all sorts of cables and extras in the box, USB-C, mini display, power, USB to god knows what, it did not come however with the HDMI cable which is essential to get something on the damn screen (I had one in a drawer)! Oh, and you can imagine the wife's response to all this, I'll be lucky to get a cracker at Christmas. 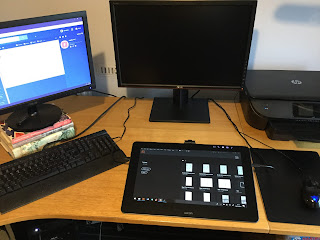 Posted by George Anderson at 15:34