Murder in the Woods

Club night and summer continues to be rubbish, warm enough but grey and still lots of rainclouds and as we say north of Hadrians Wall "the nights are fair drawing in". No matter, Rob served up another Muskets and Tomahawks game and this time I went out on a limb and took charge of a bunch of eco friendly First Nations, no only kidding, a large blood curling war band of Red Indians hell bent on murder and mayhem. The scenario was simple, there were a couple of bunches of civilians roaming aimlessly in the woods and we had to either capture them (Rob) or kill them (me).

I found myself up against Simon and his Irregulars, in keeping with my character I decided simply to bludgeon my way forward, this plan was scuppered in that the Yanks managed to leap across the table at a great rate of knots and give the civvies protection before we got close. The second turn also seemed to favour the Yankees although Rob assured me we had activation cards somewhere in the deck. 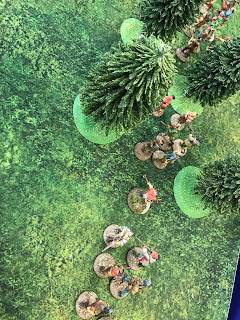 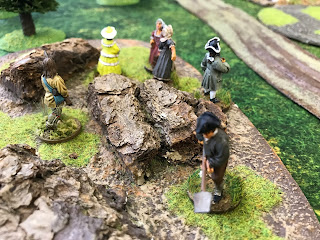 Nonetheless I did manage to threaten Simon's right flank and after letting loose with a few good volleys I threw my warriors into close combat, these were bloody results for both of us and the American allied chieftain and his men bit the dust as did quite a few Irregulars along with a lot of my braves. Over on my right the Jocks were commanded by Rob and were taking a pounding from the Americans on that flank, nothing was going right for Rob or the devils in skirts. My attacks had however frightened Simon and he led his group of civilians out of harms way and I had pushed him almost back to the table edge, but I had run out of steam, Rob likewise. I only managed to take down the odd civvy with my long arms but not enough to come close to victory. Time was up and that was that, another bit of fun and an enjoyable evening. Elsewhere we had a boardgame, some Bloodbowl, X-Wing and a Chain of Command campaign game. 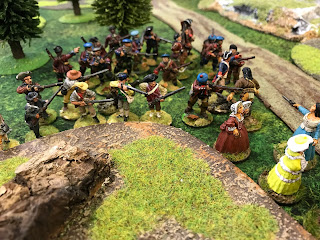 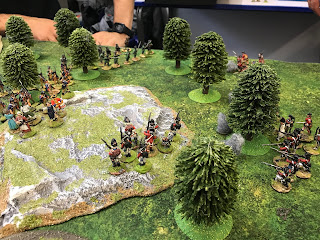 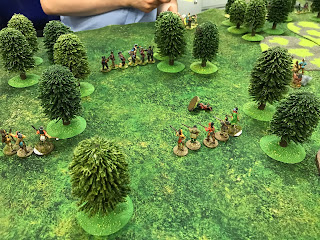 I have continued to add bits and pieces to my WWII forces, to add to the smoke markers I made explosion markers with clump foliage and BBQ skewers, sprayed with black and then a dusting of grey. I noticed that I could also use some minefields, these are six inch squares in CoC so I dug out some old cardboard which the Post Office always has in abundance and cut out eight lengths with pointy ends. I then stuck bits of matchsticks on them before dipping them into my Sharp Sand tray, after this a coat of Vellejo Flat Earth, then two drybrushes with Gold Brown and Dark sand, the matchsticks I painted with Panzer Aces New Wood. Next up was flocking, flowers and tufts then I added some 'barbed wire' which I had given a wash with MIG Dark Rust. This only left an internet search for suitable signage for minefields which I printed out and stuck to more matchsticks and voila. Not perfect but perfectly presentable I think. 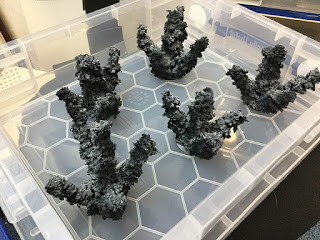 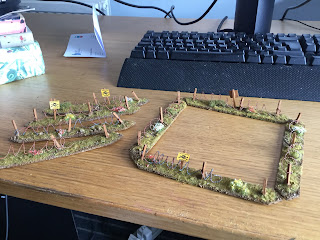 So what's next, well I have two more buildings coming from Charlie Foxtrot which I will put on smaller bases to make them easier to fit in for scenarios as most of what I have now have rather large yards. Colin at CF is doing bases for me and has also offered to 'pave' them, great guy.

I completed the great wargame survey being done by Wargames, Soldiers and Strategy in order to get the free tank commander sprue from Rubicon with four excellent sculpts on it, a terrific gesture from those guys. I have to use my code in the next day or so but am toying with getting a couple of vehicles along with it, I just have to make my mind up which.

Stuart, whom I have been playing Chain of Command with has some really imaginative Jump Off Points and although I have some of the usual oil cans/crates etc. I really want to try and get something like Stuarts, so I am looking out for character figures for WWII.

This all means of course that the SYW is getting left behind, I plan to order more troops for September.

I am a big Seinfeld fan and have all the Seasons which I watch every so often, I started again from the beginning a few weeks ago. There is a particular episode in which Elaine eats Jujyfruits and I always wondered what they tasted like, my son was in the US recently and guess what....... 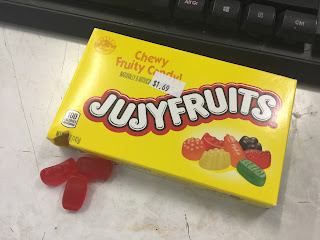 And like most sweets, you only get so many of the one which you like the best, the black one!
Posted by George Anderson at 14:22