Plenty of wargaming for me lately, ACW last Friday and War and Conquest yesterday. Matt Crump of Wargames in the Dungeon had hosted a game a couple of months ago in Penrith so I reciprocated with a Dark Age bash at Casa Anderson as he had an interest in trying out the WAC rules. 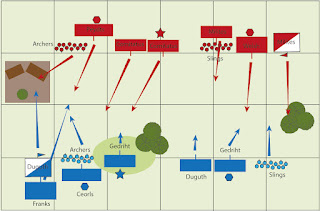 I kept the points down as it was an introductory game and kept both armies fairly even in strength, I took my default Saxon Heptarchy and Matt commanded the Romano British, I kept the deployment simple as well and we went for a Pitched Battle. I had weighted my left flank while leaving a couple of units to watch my right, I thought I could push forward my cavalry and archers to brush away the enemy skirmishers and then turn in on the British flank. My Franks I set against the Pedyts while I would hold my other two units around the hill, on the right I would also hold back and see what happened, despite facing three units with my two I had an elite household unit there which I hoped would outclass the opposition. 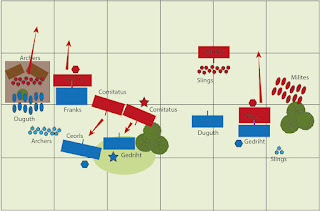 Although my skirmishers took heavy casualties, especially the slingers on my right my plan was working, the Franks crashed into the Pedyts and soon sent them running for the rear while the rest of the army went into shieldwall as the British bore down on them. Matt wasted no time and his Welsh hit my Gedriht on the right and his Comitatus slammed into my Ceorls and my bodyguard unit on the hill. 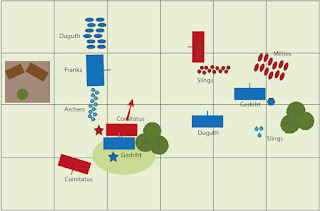 My Ceorls held for a turn before fleeing and being dispersed, my household troops beat the Welsh and the King's men held the hill. The Franks, now with my cavalry and archers in support, got ready to move on the British rear, Matt turned a unit of Milites towards them. At this critical juncture the Comitatus and Dux in combat on the hill fled and were dispersed as the Gedriht followed up in pursuit. It was all over, Matt handed over his sword.

I think Matt enjoyed the game albeit I forgot several rules not having played for a while, I gave him a loan of a rulebook and I am sure he learned some lessons from the game, as a veteran wargamer I am sure I will not get off so lightly next time. So, there you go, no real winner or loser as it was an introductory game and we all know what an uphill struggle it is playing a game from scratch the first time. It just remains to say thanks to Matt for taking the time to drive down.

With the end of several map projects last week I at last managed to get some time to paint my second unit of gendarmes, there are no significant commanders amongst these horsemen so I only added two French standards to them. Black Band pikemen are next and the figures have been cleaned and primed, this will in the end be 36 men and can either fight alone or be added to the 36 which are already complete. I also took delivery of another eight crossbows from The Assault Group. I now have to think what will be next and which standards I will have to draw, certainly another cavalry unit but not gendarmes this time, perhaps I will turn my sights towards some Imperial landsknechts and a change of manufacturer, TAG or Steel Fist. 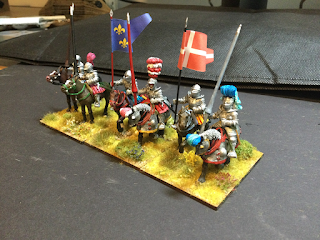 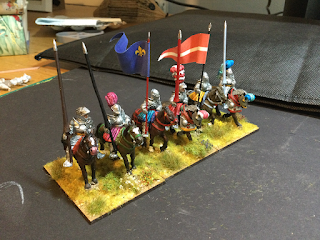 Still busy with maps but the pressure is now off so I can relax slightly. Another introductory game on Tuesday at the club, Jimi wants to try Chain of Command, he has British Airborne so I am going to use a scenario from WSS107 from Lardy Nick which I am sure will be in the Arnhem supplement when it eventually turns up.

Posted by George Anderson at 17:41