Up until recently my son Stewart and I had managed to get at least one game a month, then along came real life and our planned programme fell by the wayside, until this weekend that is, Stewart arrived yesterday morning with his Western Franks ready for battle. The plan was to have the Franks ready for the War and Conquest tournament in May but due to unforeseen circumstances I think it may be a few units short, no matter I have more than enough troops to make up his numbers.

I had decided to bring my Romano-British army to the table as they too are going to Newark in May. I knew there would be at least three good cavalry units opposing me along with some pretty tough infantry so I gambled in making both my allowed Comitatus units cavalry, backing them up with Milites armed to the teeth with javelins, thrusting spears, light armour and large shields, sadly their morale is not great but to help out I took a Tribune, a Bishop and an army standard to bolster them. I was slightly nervous as the Franks had won the last battle fairly decisively. 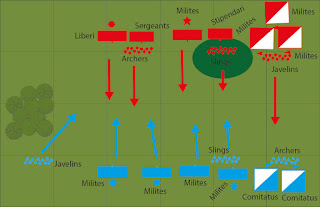 We set up for the first battle on an open plain with a wood on one flank reducing slightly the area to fight in. I was outnumbered by one battle formation but as it was cavalry and it was placed behind two other cavalry units I was happy, Stewart was keeping it back as a reserve. We faced off unit for unit along the line, I advanced my infantry as did the Franks but I kept my cavalry back as I wanted my archers to kill off the enemy skirmishers to their front and then weaken the cavalry behind them. This plan didn't really work as the Franks crashed home and the archers ran, but only one enemy unit had charged the other deciding the time wasn't right, I managed to get the initiative when I wanted it and my infantry line locked shields and presented a shieldwall to the Franks. 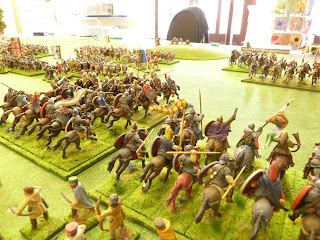 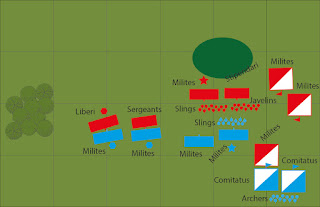 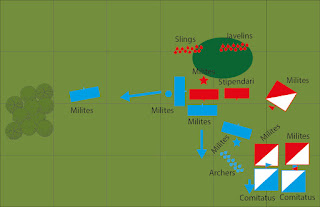 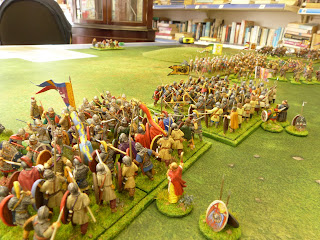 Stewart charged with two infantry while the others were prevented in doing so due to a large skirmish scrum between the lines, I eventually won the resulting melees. Frankish morale hit rock bottom, I turned on his centre and hit his dismounted Milites in the flank, I also rashly broke shieldwall and charged him in front to make victory certain, imagine my horror as both my units were broken and sent packing, one being caught and dispersed. This particular Frankish unit was building up a fearful reputation with this act and its performance in the last battle. The cavalry battle was still undecided as no one could land a crippling blow, my cavalry were losing but their morale could not be broken. Eventually one of my units did run but for some reason Stewart did not follow up and I rallied at the table edge, saved by the bell, my archers now turned on the surviving Franks and dispersed them with firepower, at the same time I eventually managed to destroy their friends fighting my other cavalry. 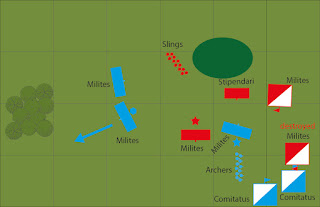 As we neared the last turn the Franks still had three battle formatons on the table, however his cavalry would have to fight two of mine, my Dux only had Stipendari in front of him who were outclassed and outnumbered by his Milites. This left the victorious Frank Milites hanging in the air with Brits behind them and the routing Brits with a good chance of rallying. The pendulum of victory had swung back in my favour. This was a good battle, the armoured, elite cavalry of both sides had taken a long time to decide the winners and due to excellent morale throws and a slight edge in numbers my men won through while Stewart's were frustrated at every turn. 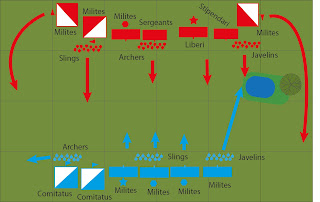 For the second game I swapped my cavalry to my left flank and my overall plan was again to hold back the cavalry while advancing my infantry but I had to hold one infantry unit back to defend my right from flanking cavalry and some infantry to their front. Stewart had also swapped his cavalry around but this time the extra unit was going to be used for a wide flanking movement against my right. Again the cavalry opened the combat, and again the struggle would in one case go on for most of the battle, the other however saw my cavalry rout the extreme right flank Frankish troopers and get behind his line. 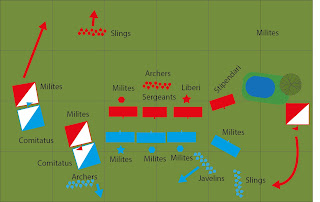 The Franks on my right took their time to get on my flank and looked more dangerous than they were but I could not be sure. As Stewart had come forward very quickly in the centre I stopped and put my men into shieldwall again, he now had to come at me otherwise I would sit and shoot javelins all day, although once close enough I would have charged but he got in first. We both lost an infantry block and again his favourites bounced a shieldwall back, however with my Dux in the front line their morale held despite fearsome casualties. Time and again the Franks won this particular melee only to have my boys dig their heels in as the bodies mounted. Morale was not so good on my right and my defenders ran for the hills, things were looking decidedly dodgy.


All of a sudden my cavalry won their melee, Stewart's heroes were hit in the rear by cavalry and once again my infantry against all odds held, his men died to the last man, no quarter. Again, nearing the last move I had four battle formations against three, we had one each badly mauled but the only other Frankish infantry were the unreliable Stipendari, we shook hands and that was the end. 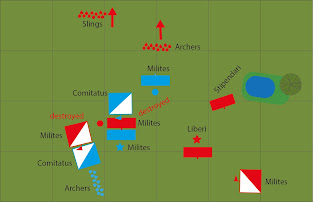 Another good fight and if my right flank unit had passed its morale check and flung itself at the Stipandari the result would have been overwhelming or possibly overwhelming if they could beat them before the cavalry hit them in the rear. Stewart's foot Milites were definitely the men of both matches despite being cut down in the second, I shall have to be careful of them in the future.
Posted by George Anderson at 20:30