Heavy Weapons for the Twelfth

I have finished these 'bad boys' in a couple of days, no patience. I have perhaps gone overboard and should have got the small scorpions, but you know what, stuff it, they are a lovely group which were a joy to paint and get ready for the field of battle. No doubt they will fall prey to that one guy who can't keep quiet and has to blab that they were only used for sieges and not on the battlefield, in order to let everyone know the depth of his knowledge. And yes, I got the order wrong. 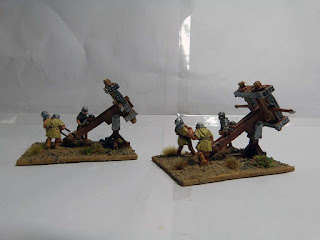 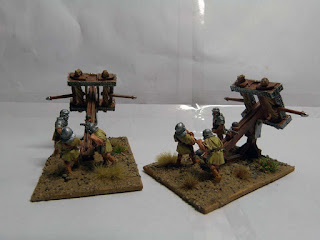 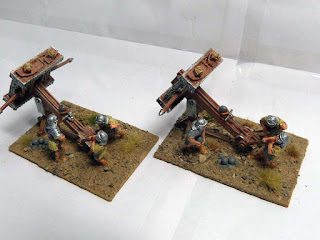 I have prepared some extra characters along with the last Romans for painting during next week, the missus is away so in between catching up with Gotham and the Flash, maps and perhaps serving the odd customer, I hope to have these done before everything comes to a halt on Christmas Eve. 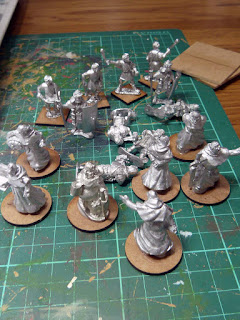 I stuck with 'The Last Kingdom' and quite enjoyed the last episode, I hope Uhtred gets a haircut before the next season. I am not entirely sure about the 'England' thing, one minute Alfred is banging on about Wessex, which in turn becomes England or vice versa, with several kingdoms in the land would anyone have been thinking of fighting or saving 'England', I doubt it. Did you notice the fighting Nun riding off into the sunset with the boyo, oh dear that's going to take some swallowing. Anyway, overall I am happy we are getting a second run at it.
Posted by George Anderson at 17:52