Winter is upon us, the view this morning is cold indeed, a thick layer of frost covers the cars, it is damp and it is still very dark, mind you it has been dark since the beginning of November here. However it is far better than last weekend when Storm Desmond hit. The Met office, perhaps in an attempt to justify their huge wages despite normally getting things wrong, now give storms names, I can't remember this being the norm. Abigail, Barney and Clodagh, must have been heavy rain showers at some point during the year as I can't recall other parts of the country grinding to a halt for a few weeks with newscasters standing in water to show you, eh water. I may be wrong.

Desmond however was certainly a storm, we had had torrential rain for almost a week before he turned up, on the Saturday it had already rained heavily for almost 24 hours continuously when the wind began to roar through the village, I can always tell because the bushes in Eyebrow Cottage and the trees in the gap across the road bear the brunt of it. It was my grandson's birthday party and the missus insisted we try to get to the other side of the country, I knew better than to argue and knew better to make the decision which would scar Jamesy Boy for the rest of his life as his Gran and Papa had not been at his second birthday and it was all Papa's fault.

So we loaded up the wife's car, if we were going to have an accident of some kind better that than the Batmobile, and off we went, window wipers on fast wipe even before we left the drive. The motorway was horrendous, it was like driving on a sheet of water, we were constantly buffeted by wind and I was crawling along at fifty, glowering behind the wheel, "turn back if you want" came the unhelpful advice, the 'if you want' being the words to look out for. On we went, we had no sooner left the motorway and went half a mile along what was essentially a river when I cracked, we're going back! On the way south again we were in the teeth of the gale, walls of water and spray seemed to be flung at the car and just in front of us a car had been lifted on to its side, it hadn't been there fifteen minutes ago on our way north, I was down to forty and gripping the wheel. Roads were beginning to be closed in the area around the village so once we did get back we battened down the hatches and stayed put.

The power went at 22.30, there was a mad scrabble for head torches and candles, no big deal we can have a cup of tea, no, check up on the internet, no, at least a slice of toast, no, phone family, no, find new batteries for the useless torch, no, the power will be back soon, no.

The weather had improved by Sunday morning, so guess what, we went to Jamesy Boy's. On the way there were trucks lying in fields or stuck in hedges, apart from that the journey was uneventful thankfully. Seemingly the young lad was none the wiser we had not been there on the Saturday. On the way back there were huge traffic jams still around Warton and Carnforth and as we approached the village we noticed lights on and Christmas lights merrily blinking away in gardens, but once we got to Main Street, oh cruel fate, our part was still in darkness. I needed to check my emails, no I really needed to, I needed contact with the outside world, what was I missing. The Gods were listening, we had been back in the house for about ten minutes when BOOM, let there be light, quick fire up the computer! Needless to say I had missed nothing and my inbox remained undisturbed. 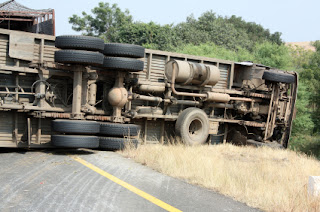 We had another small outage on the Monday afternoon for about four hours and then that was it. We were the lucky ones, Lancaster had no power and was flooded, business' ruined and in the village some residents had to leave their waterlogged homes. Being an old village we have a patchwork of electricity lines and phone lines, some are still above ground, the top end of the village get their electric from Milnthorpe which is miles away and they never suffered at all, while we did, the other side of the street has fast broadband, this side doesn't, go figure.

Perhaps all this misery is at an end now that our betters have sorted out an agreement in Paris to limit a rise in the planet's temperature by whatever fraction of a percent, how arrogant are we that we can even discuss this nonsense, the planet will do what it wants to do despite us. Can you imagine people in the past when the weather changed come up with stuff like, we have to take more chariots off the roads, limiting candle emissions to one per mud hut, worrying whether cabbages will cost more?

I see the supermarkets are jumping on the bandwagon helped by the BBC, reporting last week that oranges, pineapples and other exotic fruits are going to cost more, while walking past boxes and boxes of the stuff. I remember in the time before climate change became a religion and was merely called global warming that we were going to be able to grow all those things in our back garden in the West of Scotland, I'm still waiting to see a label on my Kiwi Fruit which says its origin is Motherwell.

On the West of Scotland did you see those poor bedraggled Syrians who had been relocated to Bute on the Clyde, this puts the population of the island up from 7,228 to what, 7,245? You manage to survive ISIS/ISIL/IS/Daesh/ISIL-Daesh (delete where applicable), you land in Europe soaked, nearly drowned but alive, you are accepted instead of being left in a squalid camp and they put you on ... Bute! I wouldn't live on Bute, there are no jobs on Bute, they are the only Syrians, possibly the only foreigners on the island apart from the odd Italian chip shop or Asian mini-mart owner. Why weren't a couple of family's taken in by those four or five politicians vocally led by Yvette Cooper, who boldly declared they would take in a family to spite David Cameron and appear human. Yvette's spare room remains empty to date.