I have always wondered why Allied tank designs were so different to the Germans and Russians who seemed to understand tank warfare better, although I suppose they both had years to work it out correctly on the battlefield while we were stuck with what we had until near the end when the good stuff started turning up, the British Comet and American Pershing spring to mind. So in the main we were stuck with the Sherman, reliable, but a tall silhouette, not enough armour and a usually pretty poor gun, but there was lots of them and they could be improved.

I wasn't going to add a Sherman to my British forces but found in the end I had no choice, however I did not go for the tank killing Firefly as these were outnumbered by the number of normal Shermans and I am not one for going for elite or super units. So I received Warlord Games' Sherman V for my birthday.

The kit was fine, there were a few mold lines and a few bits of flash on parts but nothing to worry about, there were instructions thankfully, unlike a lot of Warlord kits. There are usually little numbers next to each part to identify them, Warlord don't do that, OK it is unnecessary with this kit but there was one part which was in there which I have not a clue about, I can guess it may have something to do with the rear bins on the turret but it is now in a drawer somewhere. I think they missed off the usual spade and axe which you can see on a lot of photographs on the rear deck.

I do wonder if it would have cost them much more to give you a 17pdr gun barrel in the box to upgrade it to a Firefly, although I am unsure whether these used the Sherman V build, if they did it would have been a nice addition.

All that aside I am very pleased with how it has turned out, it is a nice substantial little model and the use of stowage really brings it to life, I have seen several British Shermans with foliage on them rather than camo nets so when I find a decent foliage it may get some of that as well to finish off, I am not 100% happy with the stuff I have used on my German vehicles, I have seen better. I also noticed from photographs tanks with tracks around the turret for added protection so I gave mine some. I have not yet added any decals but might do this this afternoon, although I notice markings are hard to see in many photos. I have gone for a dusty look this time and left the mud off. 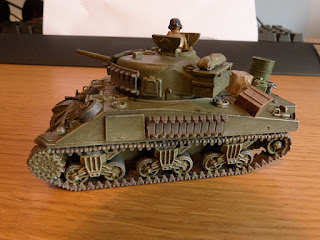 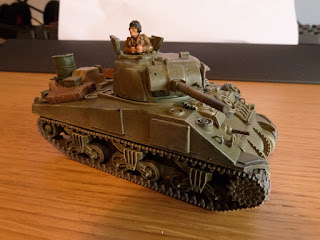 PS I put the decals on after all, Fife and Forfar Yeomanry and gave it a name. 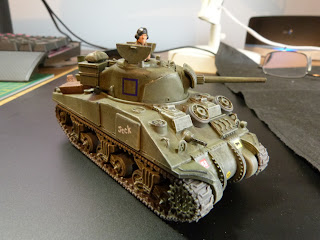 Posted by George Anderson at 13:03