Getting to the end of another year at the club, we have our Christmas game next Tuesday when all who can, participate in a large skirmish type game, last year was a Lord of the Rings game with sweets placed all over as objectives, this year I believe with will be a Steampunk type game but I am not sure.

So the last 'real' wargame for me was Bolt Action last night, there were four of us, Ryan who has not played before was German alongside Julian with his new Italians, for the Allies I was British and Simon was Russian. We had 600 points each so there was not a lot of armour around, Julian had a small tank with an auto-cannon and a truck, I had a Humber armoured car along with a bren gun carrier, both Simon and Ryan had light anti-tank guns. 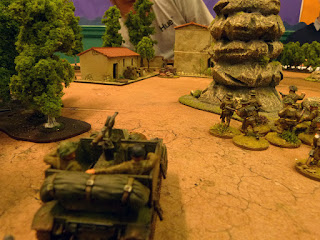 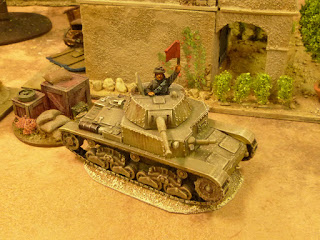 We used my desert mat and Julians beautiful Mediterranean houses complete with all those little touches which just lift a project to that next level, like the plant pots, donkey and dilapidated wagons and carts. It was a simple game due to Julian and Ryan's lack of experience so we placed three objectives and it was game on. 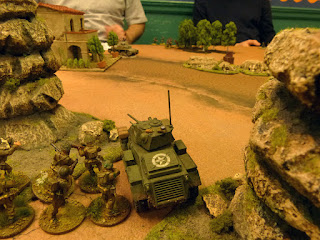 I was on the left flank opposite a farm complex, I had gone for firepower so took two full infantry squads all with rifles and an LMG supported by an MMG team and the bren carrier with two more LMG's, my plan being to shoot the enemy to death and walk to the objectives. It was basically the same scenario on the right with Simon heading for another large complex, the Axis spread their forces over the table so we fought both Italians and Germans rather than one on one. 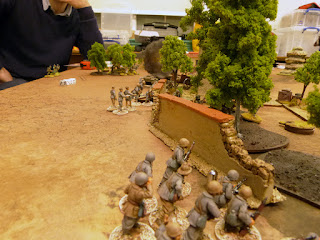 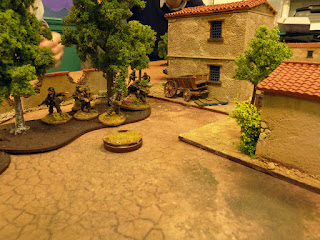 Julian rapidly advanced his little tank and opened up only to miss, I met him with my Humber and I too missed a flank shot, we were both a bit tardy with our infantry as I didn't want to advance before causing some mayhem, I was also a bit scared of the anti-tank gun which was way over on my right, I shouldn't have been as it proved mostly useless at hitting anything. There was a large outcrop of rocks in the middle of the table which frustrated a lot of shots. I got the first die out of the bag in turn two and bang, up went the little tank, I was overjoyed as this doesn't happen very often when I shoot at other vehicles. 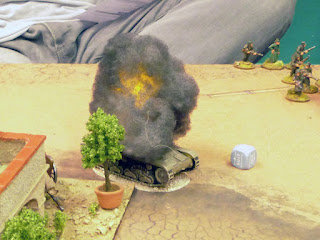 Julian moved into a house to control an objective and I landed artillery on it which upset the guys inside but did not cause them to run, Simon had taken a house on the right which gave him an objective. As we neared the end of the game I moved up to contest Julians objective, Ryan moved up and took the middle, both now tried to wrest the third from Simon to get a win. Unfortunately for them the Soviets were more than capable of holding theirs, a flamethrower caused havoc among the Axis and then an elite unit of infantry with armour cleared the courtyard to maintain control, it was one each and a draw. 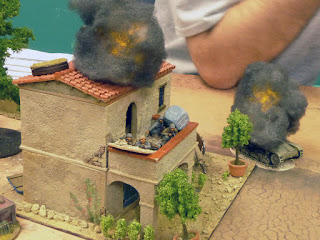 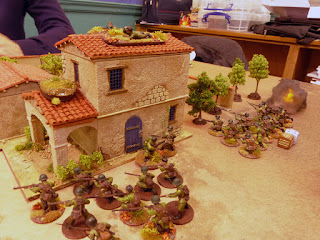 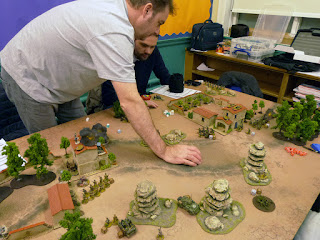 In the game I was too cautious, we didn't have enough time for me to pussyfoot around and I was thrown off by killing the enemy tank, if we had managed another turn or two it would have been a different story and we could have followed up Simon's success on the right, but it didn't happen. I did manage to take out a German squad and inflict a lot of damage on the unit in the house so in the end I was happyish. The Germans had some dreadful luck with their dice and couldn't hit a barn door which helped immensely. As we discussed the end of the game I pointed out that being a newcomer to the game Ryan was on the back foot with regard to what he spent his 600 points on, he could have had one less infantry squad and a bit more support while keeping his men together to work in a coordinated fashion rather than having troops all over the battlefield, I think this was one of the main problems with the enemy attack. I am sure the next fight will be much different.

As you can see the terrain was terrific and the Italians were really nicely painted and lovely figures, especially the strange truck, the whole game was a joy to play and take part in. Tea light explosions showed up at the club for the first time, they are all the rage as I have half a dozen and Simon also has them. 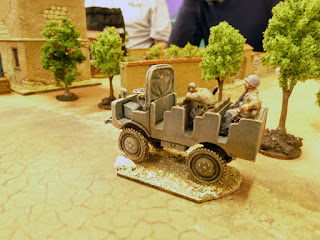 Oh, and I said I would retract my opinions on Time Commanders if I felt I was wrong, so I am not going to. I gave it half an hour almost before I reached for the remote, I am sure many non wargamers and some wargamers enjoyed it and good luck to them, after all whether you like it or not you are paying for it.

I have a Roman archer unit primed and ready to go, my first Auxilia ready for basing and more troops arriving from Footsore today, so plenty of work for me during the long winter evenings.
Posted by George Anderson at 10:45