Quick on the Draw

Pretty quiet day at last, I opened the PO this morning and after two hours of sitting I decided to close as I had had no one through the door, big mistake, just as I was putting the key in the hole I had to sell one stamp, then I got four more in a matter of minutes, so I had to sit put.

I did manage to complete a map in that time however so all was not lost. One of my presents this year was an 'artists glove' for use with drawing tablets, a bit pretentious thought I but no, far from it. The idea is that the glove allows your hand to glide rather than slide across the drawing surface while at the same time it cleans it, does it, yes it does. I wore it yesterday in the shop and when I had to get up and serve someone I could see them looking at my hand but right up until the end of the day not one asked me about it. I have to mention that those books in the pic merely support a monitor, they are not mine, well the cookbooks are but they turned out to be hopeless unless you are cooking for 50 people. 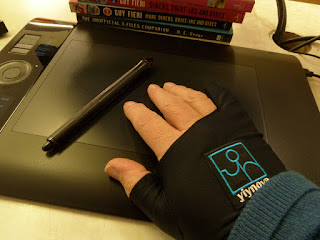 I managed to get a couple of hours free and couldn't stop myself building and priming my two new kits. They are Rubicon and are very nice although I do think the MG's need to be more substantial for wargame wear and tear, I know they have realistic proportions but still I can see they will need careful handling. The instructions for the 250/1 had a few B's and C's the wrong way around and the pannier you can see just forward of the tracks does not look like the pannier in the drawings etc. which is flush like the one on the other side. I have left the front off as I need to paint the interior before cementing it down. 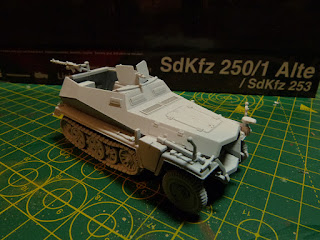 The StuG III again had the same muddle with some B's and C's which caused a problem for me, I was building a mid production model for summer 1944 and popped the B03 top on the cab only to find out too late it should have said B04. Now this is not a life or death mistake as I doubt many wargamers looking down on the battlefield will be able to tell you whether the vehicle is early, mid or late, I certainly couldn't until I built this. However if the options are part of the kit they should be labelled correctly. I cannot be the only person to have noticed this, or perhaps the others had keener eyesight than me. 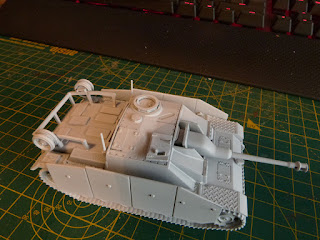 Despite this if I need a kit and Rubicon do one then I shall continue to buy theirs before anyone else's, at least there is never any major parts missing or broken like a certain other company's wares.

I have a few things on the go just now, I am finishing some Late Roman archers, only the bases to do now, pics soon and I have a Comitatensis unit needing spears and shields before priming, I have more on the way, archers and the last Auxillia before I move on to the cavalry and Germanic allies. I will probably do the two vehicles next and get them out of the way.
Posted by George Anderson at 14:36