I am well known for always having a book at hand, while travelling offshore in the chopper, taking the boys to their clubs, on the train or wherever. I have been fairly lax though for the last six months or so, not that I have not been reading books, but they were all associated with my new late Roman army, so more research than pleasure, albeit I enjoyed them. Getting the new iPad mini hasn't helped either as I tend to pick it up rather than a book, although I am weaning myself off this constant checking for what turns out to be nothing, no emails, no posts most of the time.

I do read the Spectator on it though, they send me a paper copy but I don't really pick that up, the Spectator is important because it has a book review in it, something which always tweaks my interest and the buying of books usually follows, the Sunday Times was bad for this until it dumbed down and I gave up on it. My first buy then has been 'Praetorian' by Guy De La Bedoyere, it keeps me in my Roman bubble and it covers the famous or infamous military unit from beginning to end, this no doubt will be the first of many. 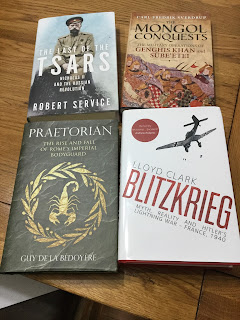 While out shopping the other week I also noticed several books on Russia, an interest of mine, especially the period between the Revolution and the fall of Communism, I duly noted the titles and on getting home ordered up 'Praetorian' and 'Last of the Czars'. I also bought one book in the store, 'Blitzkrieg', supposedly a new take on the Battle for France, I am really enjoying it but it is far from a new take with nothing new revealed yet.

My fourth book in the ready use locker is one for which I drew the maps and was given by the author as payment for making some corrections once the project was finished, 'The Mongol Invasions'. The original stuff I was given was pretty bad and although the finished articles look good they need some tweaks, but it is too late now.

I do always feel a little guilty buying books online, but you can get new books for as much as 50% off and it is really difficult to pass that by. I have bought many books at the usual £20 - £25 mark as the contents intrigued me and found them to be rubbish. I also do not go into the local Waterstones now as much as I used to as I find that my military and historical interests must be frowned on at HQ as their selection diminishes with each visit while the section on Angels gathers more shelves.

Posted by George Anderson at 09:57

Email ThisBlogThis!Share to TwitterShare to FacebookShare to Pinterest
Labels: Books