Once again a fight against Ryan's Seleucids, this time with an elephant, this beast is very powerful in War and Conquest, I hesitate to say too powerful as I have only come across one twice before in my many games. The first time it was no problem and the second it was used in a manner not conducive to the rules and I got stuffed, this defeat has now been expunged from living memory due to the manner it was used.

Anyway I still had a bit of a fear of Nellie so I decided to think outside the box with my choice of troops, I also had to bear in mind the staying power of those phalanxes. I therefore went with a veteran cohort supported by two raw cohorts, to offset their slightly worse morale I put a Centurion with the new troops, the Emperor would command the veterans, I decided not to take cavalry as the Seleucid cavalry is marginally better than mine unless I take the cataphracts and at 2,000 points I could not afford them, so I took an auxiliary cohort instead. My firepower was archers, horse archers and two bolt shooters, these were the lovely Aventine manuballista figures, a hand held ballista in other words, to hopefully stampede the elephant before it did any damage.

I have a terrain matrix but as Ryan turns up straight from work and time is of the essence we didn't use it, I also forgot to bring it, so the terrain was fairly neutral. I plonked down a line of legionaries, two with heavy armour, with my auxiliaries on one flank and the horse archers on the other, the enemy had a line of pikes, helped out by Nellie, cavalry on one flank and a horde of skirmishers on the other. 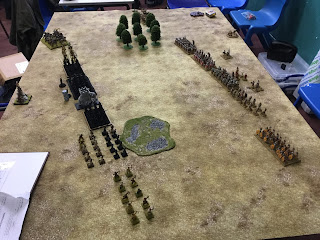 My plan of course was to cause some casualties on the elephant and hope it went mad and out of the game, Ryan went first and came straight at my line, my bolt shooters did indeed hit the beast but he made his morale check. I also saw an opportunity to knock out his smaller phalanxes, to this end I thought I would put Cohors II in harms way and keep the elephant busy while I destroyed his line and would then turn in on the survivors. Things looked really good and then I threw two fives for initiative, even better, but no, Ryan threw one six, it was the beginning of the end and so soon. He hit Cohors III with two pikes and Cohors II with the elephant, I could not shoot at it again as it trundled towards me. Elsewhere my horse archers failed to kill any of the cavalry opposite them but on the other flank I managed my usual trick of sending the enemy skirmishers fleeing for the rear. 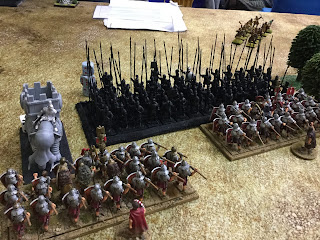 I lost Cohors III and their Centurion but it managed to outdistance pursuit, Cohors II manfully stood up against the elephant but couldn't knock it back, they were then charged by the large pike block and a long fight ensued, again the Centurion fell. Eventually I got the veterans in against a small pike block but despite a high kill rating, heavy armour and the Emperor urging them on they failed to win and only managed a draw and another, long, slow fight began, something I did not need. 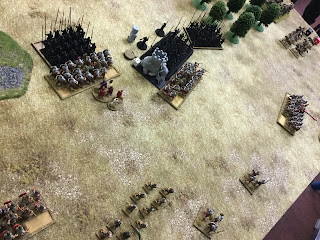 I eventually managed to win the initiative, my only time during the game, and as I surveyed the field it looked like I might just hold on as time ticked away, the veterans were at last winning but still not managing to make the pikes flee, the auxiliaries were ready to move to the centre, the horse archers kept the enemy cavalry busy and I had a large amount of firepower ready to unleash on the enemy when Cohors II eventually ran, which it did. My other cohort was now coming back into the fight. Just before all this and as Cohors II fled and gave me a line of sight I at last shot the elephant to death. 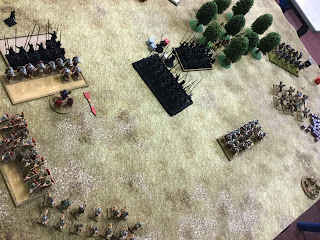 It was not to be, incredibly the veterans, now winning the melee, suddenly lost it and fled while my bolt shooters and archers failed miserably, I offered my sword.

I do not think the army choice was bad, in fact it was or should have been a tough nut to crack, not getting the initiative in that vital second dice off began the rot and not getting it again until the end of the game put me under intense pressure. The cohort fighting against the elephant and her mates actually stood up well for a long time but the other two were dire, especially the veterans, my strike force. Here is the wargamers lament, my die rolling was incredibly bad, and with one of my two favourite dice sets, the amount of ones I threw was unbelievable. My ability to kill anything was severely limited and my horse archers did not do one casualty all game, the bolt shooters too were hopeless after their first shot at Nellie, and don't get me started on the combat and saving rolls. Ryan I believe would confirm all this angst.

Ryan has now managed to paint up some slingers, and very nice they are too, we also decided to use our commonsense with the elephant and when its partners charged in they too became disordered due to the closeness of the beast in the same combat, the rules say otherwise. If you do not play this way then the elephant/infantry combo just steam rollers any poor sod in its path. For some unknown reason the elephant crew also get two shots with their bows, perhaps it is to reflect the carrying of more ammunition in the howdah, I cannot think of any other reason. It is a potent weapon but my boys have now 'seen the elephant' and after a severe talking to this morning will try harder next time, and just in case I shall use my other favourite dice.

Despite everything a good game.
Posted by George Anderson at 08:32