Thought I was in for another terrible morning serving the great British public, three customers before 0910 hrs, but it has now tailed off and I am back to the trickle. Also as the missus is back I have the afternoon off, I would have had the whole day but she has an appointment this morning. But I shall be meeting my old crony in the pub tomorrow as per our normal Wednesday afternoon.

I have finished my second tile for Normandy 1944, as you know I was inspired by the terrain Phil and Jenny brought and looked online for a garage as they had a nice little vignette, I didn't see what I wanted but I did see something a guy had whipped up out of coffee stirrers. With this in the back of my mind as I trundled around Legoland a week or so ago I saw to my delight tons of coffee stirrers at each fast food stand, I deduced that with the amount of money Legoland was relieving me of the least they could do was supply me with modelling material. I swooped in at each stop and soon had enough to repair Hadrian's Wall in time for the referendum. 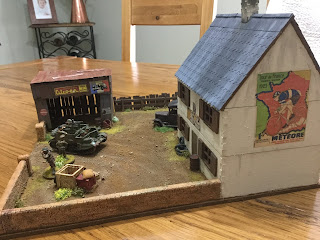 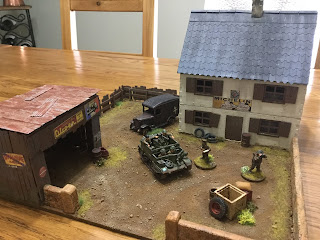 I couldn't find the pumps and bits and pieces I wanted so I decided that Pierre would be more of a local 'go to' man than an actual proper mechanic hence his place would look a bit ramshackle and worse for wear. I decided to re use my dilapidated van objective and again scrounged through my bits and pieces box and came up with enough to populate the tile. I used a Charlie Foxtrot building because Pierre of course lived on the premises and set to building his rickety fence and outbuilding, I also used some of my Warlord stone walling. Next stop was online to get French signs suitable for the 40's or earlier, no problem there. I also still had plenty of the excellent 4Ground corrugated tin to use for roofing.

So within a day or two the whole thing was ready to go, I have two more tiles still to use and would like to place one of the damaged buildings on it, the last I think will simply be a ploughed field when I find something to use for the field. I have also looked at a lot of photographs of Normandy in 1944 and there are a lot of hedges, not just bocage, so I need a few more of them.

And would I take my car to Pierre, no, look at the state of the place!

On the tray at the moment are some archers for the Twelfth, these will be done by the weekend, not much to paint on these guys. Club night and it is Dead Man's Hand.

Posted by George Anderson at 10:03

Email ThisBlogThis!Share to TwitterShare to FacebookShare to Pinterest
Labels: Terrain