I am still busy having taken on too much map wise recently, however I hope to finish several projects this week or in the next few days so that the pressure is off and I am back to normal, it's my own fault as I like to get things finished sooner rather than later and funnily enough, like to help people out.

Last Tuesday at the club was an ACW game with the Warlord Epic scale figures and Black Powder rules organised by Fran from one of my scenarios, Kettle Run. Fran has worked on the rules to give more of an ACW feel to the basics and has been play testing them for some time but I have not been able to join in until now. The Confederates hold a wood quite far forward from their main line and the Union objective is to throw them out of it and force the Rebs to withdraw, I had the Union left along with the part of the centre and Alex held the right. A small conflab was held and we decided to try and weaken the Reb units holding the wood then attack and throw them out, a mistake as it turned out, but a well thought out one, going hell for leather for formed troops with clean muskets and at close range does not usually bode well, and at that point we were not prepared to throw our men's lives away.

The musket duel in the woods fell the Confederates way, my own fire was ineffective while my regiments began to take casualties making charges all the more doubtful. Union reserves now turned up and I pushed a brigade forward on the extreme left, these guys were really keen until they saw grey jackets in front of them when it then took heaven and earth to move them. Alex slowly advanced to contact over on the right, by now the Rebs had brought more men forward and their line had solidified and the troops in the objective now had reserves behind them.


A bit late I now asked my boys to charge, which they refused to do twice as more and more Rebs turned up, when one regiment did gather enough courage to surge forward it was beaten and ran for the rear taking a supporting regiment with it, a hole had appeared in the Union line, as I tried to fill it I lost another two regiments and the hole got bigger,  you could sit an entire brigade in it, if you had one spare. As we neared the final turns it was obvious we were not even going to squeeze a minor win from the debacle, thankfully Stewart and Fran did not break into a Rebel Yell.

A good game but my timidity and disastrous morale rolls at the end finished it for the Federals. How did the rules play, better than vanilla Black Powder and with more of an ACW flavour I suspect than the ACW supplemental rules, I cannot fault my own choice of Johnny Reb 2 but I would happily play these again at the club.

Nothing new on the Italian Wars front at the moment, I have finished the horses for the gendarmes along with two standards and the riders are 60% done but I have not been able to concentrate on them for a week or so. Not so sure I will get much done this week either as I have the club on Tuesday and a refight of Kettle Run (using JR2) with Fran here on Friday and then Matt Crump coming on Saturday for a War and Conquest Dark Ages clash on Saturday.

I went to the National Royal Navy museum in Hartlepool yesterday as I had noticed it some time before and thought it would be worth a visit and bring back some memories for an old Jack Tar. I hate to be downbeat about things like this but the museum was really about the frigate HMS Trincomalee which is now 204 years old and the oldest floating warship in Europe, second in the world I think, and my own experience does not extend to the early 19th C. So much for the 'National' part of the title. There was a walk through of life on a ship of the line back in the day and it was pretty good although one part of the voice over was impossible to hear, the exhibition on the building of the ship, it was built in Bombay, was ruined by the lighting being off for some reason so it was difficult to read large parts. There was a large play area for kids on one side of the dock and a couple 19th C. rooms on the other. The ship looked kind of 'dumpy' to me for a frigate which I had always considered the 'greyhounds of the fleet', what do I know though as 47 of the same class were built and she was very well armed. There was a lack of real information on the ship with only a token notice here and there, I knew what many of the rooms and equipment were but to a landlubber it would have been a mystery, you could buy a £5 guide to keep the ship afloat but this I thought would have been better done like many museums with a large, see-through box at the exit in which to drop donations, not many people bought the book that I saw. If you were in the area and had a couple of hours to spare it is worth the visit to see the old girl and help preserve her. I will give them kudos for not shoe horning in 'the message' which ruins so many other exhibits, although the midshipman's voice did sound suspiciously female......... 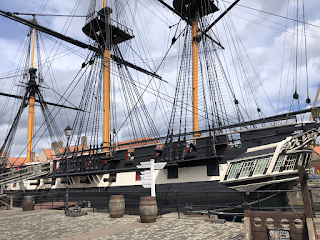 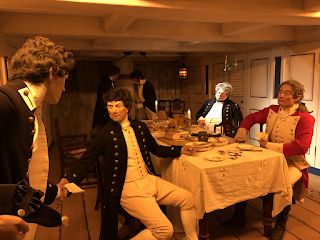 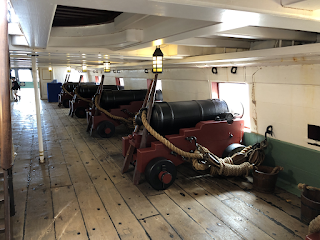 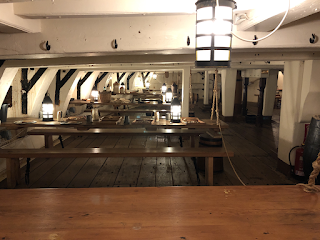 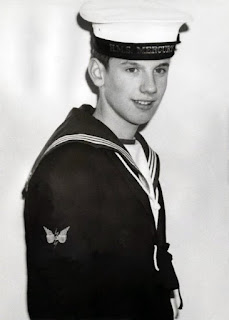 So there we go, late but better than never, fifteen minutes to go before I open the door to the great unwashed, although it is torrential rain at the moment.

Posted by George Anderson at 09:01