I have been a busy bee this last week with my painting, I am at a loose end with the maps and am awaiting some feedback so my spare time has been spent getting on with the Romans. I have settled on one Auxiliary cohort and might possibly add another in the fullness of time if I feel I need some cheaper troops than legionaries.

A straightforward unit, nothing special but the officer is a lovely figure and his second in command also just fits the bill perfectly he has a grizzled veteran look about him, although I notice I need to put a dab of flesh on his face as his 'tache is out of line. This time I put a shield with a couple of arrows in it and a dropped vexilio as I had spare transfers. 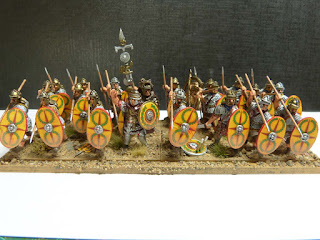 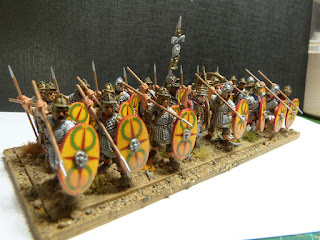 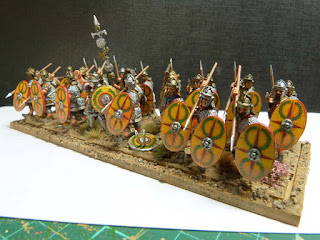 The next unit on the tray is again Auxiliaries this time light javelin armed skirmishers who can also form up in the battle line if needed. I had to get these from A&A as Aventine do not do a suitably Roman looking light javelinman, you could use line auxiliaries but I wanted them to be more animated, the figures are Lanceari and are more mid-Roman than early but this troop type is mentioned around Augustus' time so the jury is out on exactly what they were. The moulds are also past their best and needed a lot of cleaning, but they are by the same sculptor who now works for Aventine and therefore I suspect will fit in just fine. I can't say enough about this guys figures, they are beautiful and a pleasure to paint.
Posted by George Anderson at 13:51