I am sitting here serving the public or waiting for the few who venture across the thresh hold on a Friday and am at a loss for something to do, I don't want to bring the paints down as I am running out of room here on the counter now I have the new PC and two screens and I have nothing on the map front either for a change. So, being in a nostalgic mood I thought what started all this.

Those Airfix boxed sets of 48 infantry of all kinds kicked things off, they were too small to add them to what I had, put them in the garden and throw stones at them as they disappeared in the dirt and debris, so my 'wargaming' moved indoors. It moved to domino defences and forts at the bottom of the stairs or under the sideboard, that was a great place and I still have fond memories of it, obviously I was a lot lot thinner then. 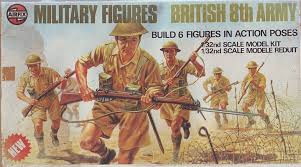 Only the guys in a shooting pose were allowed to shoot, my first ever game against an opponent involved my cousin from London and I cheesed him off by pulling wagons away from my shooters, firing, then pushing them back so he could never hit anybody. My army would consist of 8th Army, Foreign Legion, Romans and Robin Hood's guys. At the same time my ceiling was covered in model airplanes, mostly German as I was fascinated by the many and varied camouflage schemes used, I also collected some warships. I remember blowing up quite a few planes from the top of lamposts by putting a squib (banger) in them, lighting it and making a fast descent before it went off, I sank the Scharnhorst in the same manner on a reservoir, with a few boulders helping her on the way to the bottom. Thankfully I eventually turned to dice from explosives.

I then discovered Charles Grant's book 'Battle' and I was hooked, out went the Romans etc. and in came WWII stuff starting with 8th Army and Afrika Korps and for once my armies began to look like something recognisable as such. In those days of course you could only get so much stuff and most of it was allied, there was no way you could field a PzIII or IV, Airfix did have a Tiger, which was my first model tank. None of my friends or brothers had any inclination to play the game and it was mainly a solo effort, but I began through brief contact with magazines and the library to realise that there was a lot more to wargaming than just WWII. 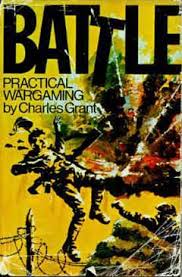 This was all happening at about that time in your life where you begin to appreciate the opposite sex and my patriotic stirrings were calling me to join the Navy with naive visions of me going down firing at someone or something while the water lapped at my heels, a la boy seaman Jack Cornwall. Which is strange as I became a Radio Operator and only ever sat on a gun (40mm Bofors) about eight years later and couldn't move the thing fast enough to draw a bead on a target flown by an old Canberra.

My small collection of soldiers, still mainly greenhorns, were packed away under the bed or in the garden shed or perhaps were given a ceremonial burial in the loft or garden as I picked up my case and headed south. However the seed had been sown.
Posted by George Anderson at 11:56