Cohors II and the joy of 'wee sojers'

My second Roman cohort is now complete, that is two to go, Cohors III and the Praetorians, however on the tray now is the Auxiliary Cohort, after that either the Generals and Rally Point or more cavalry, that'll slow things down. One of the mounted units is a 'normal' one and the other as I have mentioned before are Contarii which may possibly have been another name for early Clibinarii or Cataphracts, for my period they may simply have been shock cavalry without armoured horses, whatever they were I have to do a bit of further research. I will probably leave these until the very end as they are not in the 'official' lists as yet.

Anyway I digress, back to Cohors II, I used the pilum's which came with the troops but cut them down a tad so that they were a bit stronger and wouldn't bend as much if touched, I also cut the poles off the standards and put my own on, again to strengthen them, all this seems to work fine as I have nudged them quite a bit while varnishing and basing. 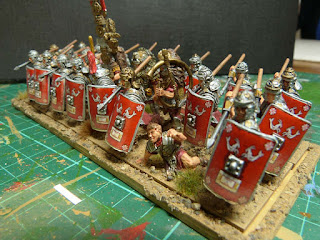 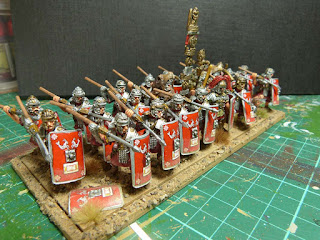 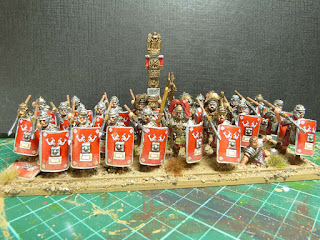 I wanted to put a bit of character into the unit and therefore added a casualty figure and a dropped shield which is a simple but effective aesthetic device, I wasn't sure about the wounded soldier but I think he works fine.

Another thing I did different this time was that I did not use different washes, this time I wanted to see how the Tamiya Smoke would turn out used as an all over wash, and I was suitably impressed and may continue with this. Actually I tell a lie here, I use Vallejo flesh wash on the skin, forgot about that.

I just love when a unit is near to completion and putting the finishing touches to the bases after which I can pour a drink and just look at them for ages. I fail to see why any bloke worthy of the name would not be enticed into collecting armies, modelling dioramas, building kits or leading his 'wee sojers' against worthy opposition.

No wargaming this weekend as work on the house has now started and I have visitors coming in October for an indeterminate time so I cannot see any extracurricular gaming for awhile, but never say never eh?
Posted by George Anderson at 21:36