Sunny this morning, a 'watery' sun as we Scots say, I couldn't really explain it in words you just know it's 'watery' and that's it, no wind and I will guess it is fresh outside, a sheen of dew lies on all the cars. There is virtually no parking on Main Street as it has been here since the middle ages so the protocol is that everyone parks on one side of the road and leaves the other free for the horseless carriages or no doubt the Devil's transport if you attend St. Oswalds. There are certainly devils driving some of them as they do not move aside when you have right of way, or speed through the place like a Grand Prix while texting their mates or checking Facebook, oblivious of my hand gestures, rants and grimacing face. Quite a few times we have seen Mexican stand off's with drivers leaving their cars and walking away, bus drivers sitting like statues refusing to move when you could get a King Tiger through the gap. The good thing for me I suspect is that if the criminal fraternity ever case the joint they will shortly realise that they cannot make a swift getaway as they will meet the school mam's in their 4x4's or several buses or the odd articulated lorry blocking the way. 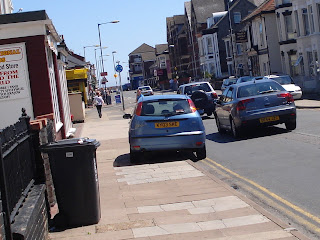 This brings me to a sore point, does your car have those 'park anywhere' lights? You know the ones, they allow you to mount the pavement and close it off to pedestrians while you leap into Greggs or put on a bet at Betfred, they blink on all four corners or the car. They also allow you to ignore all the empty places in the car park and sit outside the supermarket door while your missus does her weekly shop. Their uses are endless, I must insist on a set if I get a new car.

I have read with glee the Corbyn bashing in the press and watched grown men cry on the box about what a disaster the man is and have generally kept my opinion to myself, apart from the fact that his election by his party members says more about the members than Jeremy Corbyn. A bunch who care more about themselves than what might be good for the country, but then again what choice did they have really. If you were in charge of the country and needed a farming minister with a bit of common sense and diplomacy in this time of crises for the farmers would you honestly decide to give the job to a vegan? She wants meat eaters treated like smokers and public money spent on a campaign to wean us off said meat, she is the exact opposite of what the industry needs and a fanatical lunatic into the bargain. That's as bad as the Tories when they put a green eco-warrior in charge of energy, his name escapes me at the moment, but here we are facing the prospect of the lights going out and that clown wanted to leave everything to windmills, pointy sticks and flints. And people wonder why I don't vote.

And to reinforce my point what do you think of the £3M we are giving to one of the worlds richest nations so that they can play football, the defence rests m'lud.


As you know we are getting a new kitchen, we went yesterday to get our initial quote from one of the suppliers, let's just say that it would remain pristine as all we would be able to afford to cook in it would be toast and beans. The must have appliance now is a pantry, my gran had a pantry and we had a pantry when I was a lad, it was just a big cupboard where you kept stuff, we didn't realise how cutting edge we were as nowadays it costs thousands of pounds, who'd have thought.

Our life is about to become complicated after a fairly quite couple of months, my son is relocating from Korea which he did not like to a job in Wembley, so my daughter-in-law and granddaughter arrive on Thursday for an indeterminate time until they find a suitable house down south, my son arrives two weeks later. Tomorrow at half past eight the work on the new fire begins, a week of upset at least, then there are air vents and some repairs to the roof and chimneys, then of course there is the new kitchen once we decide who is getting the job and when it can be fitted in and last but not least the living room, stairs and upstairs hall to be painted.

Despite all this wreaking havoc with my savings I fiddle while Rome burns as I really fancy a battlefield tour of Waterloo next year taking in Quatre Bras and Ligny as well, that too is not cheap but sounds excellent and the company I am looking at has very good reviews. I have been to Waterloo but to have a guided tour by an expert would make the place come alive as I missed a lot when I was there due to a small blizzard, I didn't even dare take the camera out. My son wants to do an Indian Mutiny tour and I would be up for that as well but realistically not until 2017/18. 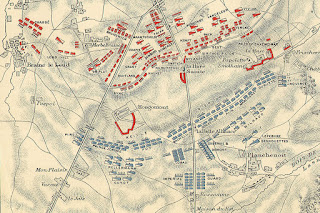 Posted by George Anderson at 09:04