It's all Greek to me.

Well I didn't do jack around the house yesterday despite my good intentions, I did manage to get a good few hours on Cohors II and catch two movies, one was fine but forgettable the other was 'Selfless' it had a nice back story, some action and overall a decent watch. 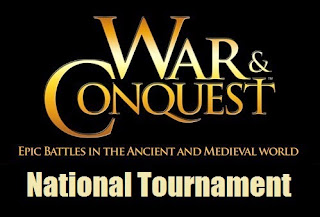 I also managed at last to get an army list sorted for the upcoming tournament in November, I went for Greek City States as I was expecting a few Spartans would turn up and I wanted to be different, but there also seems to be two other Greek City States armies on the list. Anyway I have went for the following force:-


1 x Strategos, 2 SIP's
1 x Lokhagos
Greek Rituals
Greek Comms
2 x 24 Trained Hoplites with heavy armour
2 x 24 Mercenary Hoplites
1 x 13 Javelins
1 x 13 Slings
1 x 12 Light Cavalry
2 x 20 Hill Tribes with rhomphia
The Rituals allow me to pray to the gods and receive one D3 extra SIP's, I only lose out if I roll a one, I can almost see it now, but I will leave it to the gods, Comms allows the Lokhagos to use SIP's, I have done this rather than take a higher commander for more points. The army itself has a very hard core and I am expecting the Mercenaries to do the brunt of the fighting and winning. The Hill Tribes are to stiffen the flanks and perhaps move on the enemy flanks with the cavalry if the opportunity offers itself.

There are enough players to allow two themes, Dark Ages and Classical, I have just received an email asking everyone going to confirm their attendance and I see we have Vikings, Irish, Arabs, Romano-British, Saxons and those dastardly Normans for the Dark Ages. On the Classical side there are Persians, Greek City States, Carthaginians, Macedonians, Indians and Spartans. At the moment there are nineteen players and no doubt a twentieth will be sought to even things up for the Dark Ages, there are at least seven newcomers a few of whom have played very little War & Conquest I believe but this is no barrier to enjoying the tournament. I myself have still only managed less than twenty games but am still on a high from my last win in May at Kegham Hall, this time we are back at Wargames Foundry.
Posted by George Anderson at 14:02