No club last night so no AAR today, real life caught me up and I had to stay home. I did manage to put the finishing touches to my latest Roman unit and base them up this morning. 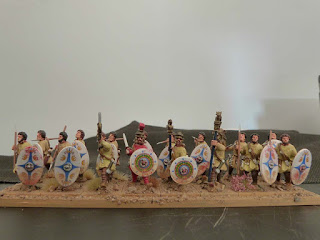 Now these are not Aventine figures as I have said and they are old moulds and in a close up photograph do not look fantastic, however, from where I am looking at the moment they will blend in on a battlefield pretty good. I have also put them on a movement tray when in fact they will mostly operate in a skirmish role, if they had been meant to be close order troops I would have had them sorted so that the throwing guys would have been in the front line, but by the time I realised it would be a good idea to put them on a tray they were already glued to their bases. There are a few whose faces do not bear close scrutiny as they look like they have been in a boxing match with whoever is the champion boxer these days, last I knew it was Cassius Clay.

Next up are my officers, 50% casualty markers and rally point, I counted up what I have at the moment and I can easily field a 2000 point WAC army, two cohorts and two cavalry units to go and I am still teetering on adding another auxiliary cohort. The artillery of course is a separate matter all together and doesn't count.
Posted by George Anderson at 13:27