A whole town comes along. I started on my Warbases Roman Villa the other day trying to be patient and not rush things, I have managed so far as this is now day three. I am also still waiting for the base material I ordered so I think it will be next week before it is complete, I want to add some little bits and pieces but hey can be ordered and scattered whenever, they are not essential. I decided as my villa would be around at the end of the period I like wargaming that it would not have the slabbed courtyard or pool, it would more likely be a working villa rather than something for a local absentee landlord. I also had to make my mind up whether to sand it up for the East or leave it with greenery for Europe, I decided it would get more use being European, so Europe is good for something, it's a joke. 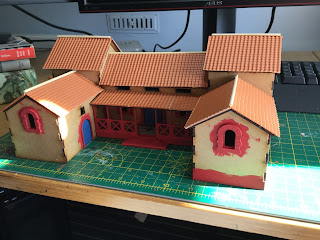 I did fail to notice that there is a build your villa .pdf on the Warbases site, it should have been mentioned on the one piece of paper in the pack, but I managed to make only two mistakes with the build and one with the lovely mosaics supplied by David Bickley. Although you won't see the inside of the villa much in the large games I play it really is a treat to know the inside looks so good and of course I shall point this out when using it. I went overboard and ordered up Pantiles from a railway modelling shop, I needed three packs and they came to just short of £12, but they are a huge improvement over the flat mdf. 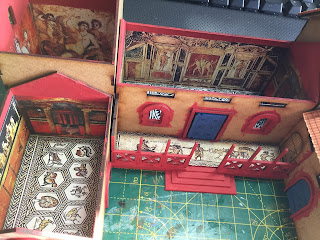 The next stage will be to paint the walls, I might get around to that on Sunday, I do not use thick plaster for my walls as most of it would probably end up over me rather than on the building, so I use a thickish paint and dip the brush into some sand, I like the finish, just enough stubble to hint at a coat of plaster.

I am hoping for some goodies from Royal Mail today, those extra figures I 'needed' and the bases for my buildings as I am also tarting up my WWII stuff, I know the troops are on the way but I am not so  sure about the bases.

Now, the town. I was directed to Warbases last night by a Facebook post, and lo and behold you can now build up a complete garrison town for your Roman army, there are barracks, shops, mansions and a gorgeous late Roman church, the only thing missing is the fortifications, a wall and towers. I of course wanted to buy several of the buildings, but uncharacteristicly I did wonder where I would put them, the villa is bigger than I thought and if you do garrison your cohorts you will need a big table. The mansion does however remain a possibility.

Oh, and I sat down to the Last Kingdom the other night while building the villa, and even though I am prepared to watch all sorts while painting or building I switched it off after about twenty minutes, the breaking point for me was the soppy, pathetic, "hope of the north" character. And another thing, there is a nunnery on the edge of the village and none of them look like Uhtred's religious lady.

I am really impressed with the camera on this iPad Mini, it manages to eliminate my need to take several pictures until I get one which is not blurred.
Posted by George Anderson at 09:58