The rest of my goodies have turned up, and a couple of other things which I 'needed' this week. I watched "Guardians of the Universe" while at a loose end last week and enjoyed it so much I ordered up three volumes of the comic to get me up to speed. Comic time lines seem to be highly complex and don't seem to match up most of the time, so this is the 'new' Guardians started a few years back collected into the three volumes, so, like my Walking Dead collections I am bang up to date, unlike my Batman stuff. Did I do the right thing, or was I just carried away with the movie, the jury is out at the moment. I told you about the spy documentary on BBC iPlayer, I have seen the second episode and it has impressed and angered me so much I bought the book. 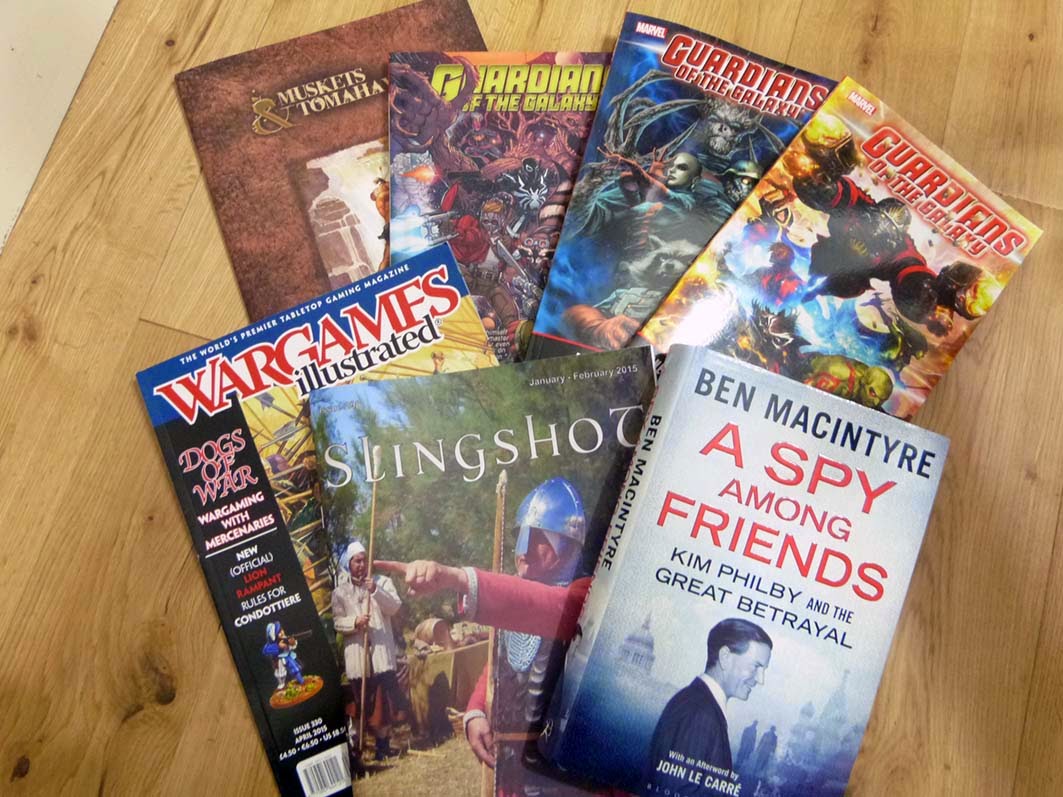 I took out a Slingshot subscription to see what it was like these days, I used to be a member decades ago and wrote quite a bit on medieval armies, especially the Scots and received a prize for a trilogy on Robert the Bruce. I renewed hoping to see some Dark Age, Late Roman pieces, and this issue has something on the latter, I also have the back issues CD and will trawl that at some point to reminisce and maybe get some information which will prove helpful when I get around to doing those Romans.

Why do I have Wargames Illustrated when I have given up on wargaming magazines, well I want to sell my Wars of the Roses figures and there is a contact number in the back, that is the only reason and I hope it works out, looking at the lovely pictures and adverts will probably pass a pleasant cup of tea.

I am not reading as much as I used to, although when I think about it that is not entirely true, I get the Spectator magazine weekly and that takes up a bit of time getting through it before the next one pops through the door. I am of course getting through the comics and picking away at Slingshot, the real book at the side of my bed is about Operation Sealion, only it isn't, it is about how we prepared ourselves for it, the thinking behind our defences and on the other hand, the reasons the Germans didn't bother in the end. It is well enough written but hasn't really grabbed me yet. One of my favourite authors, Max Hastings is researching a book on Vietnam, I look forward to that, not that I have a particular liking for the Vietnam War, but I do think Max writes good history. Strangely enough my next map project is eleven maps covering the 1972 Easter Offensive in said war.

My reading habits are in such disarray that I am thinking of once again dabbling in fiction, historical of course, someone, I can't for the life of me remember who, mentioned a book on Romans fighting in the East against the Sassanids I believe, but I cannot remember the authors name, it is not Scarrow, I get the impression there are several on the subject, and the author may also be a wargamer, does this ring a bell with anyone?
Posted by George Anderson at 21:16

Email ThisBlogThis!Share to TwitterShare to FacebookShare to Pinterest
Labels: Books