The lads I usually play with were having a large Chain of Command game last night, so that was me out, however I got a call from Simon who wanted to try out Dead Man's Hand. I packed up a relatively small 'town', I have far too many buildings and the boxes are large and cumbersome, I thought I had covered everything but forgot all the street 'debris', the wagons, barrels, boxes, sacks etc. so the place looks a little bare. 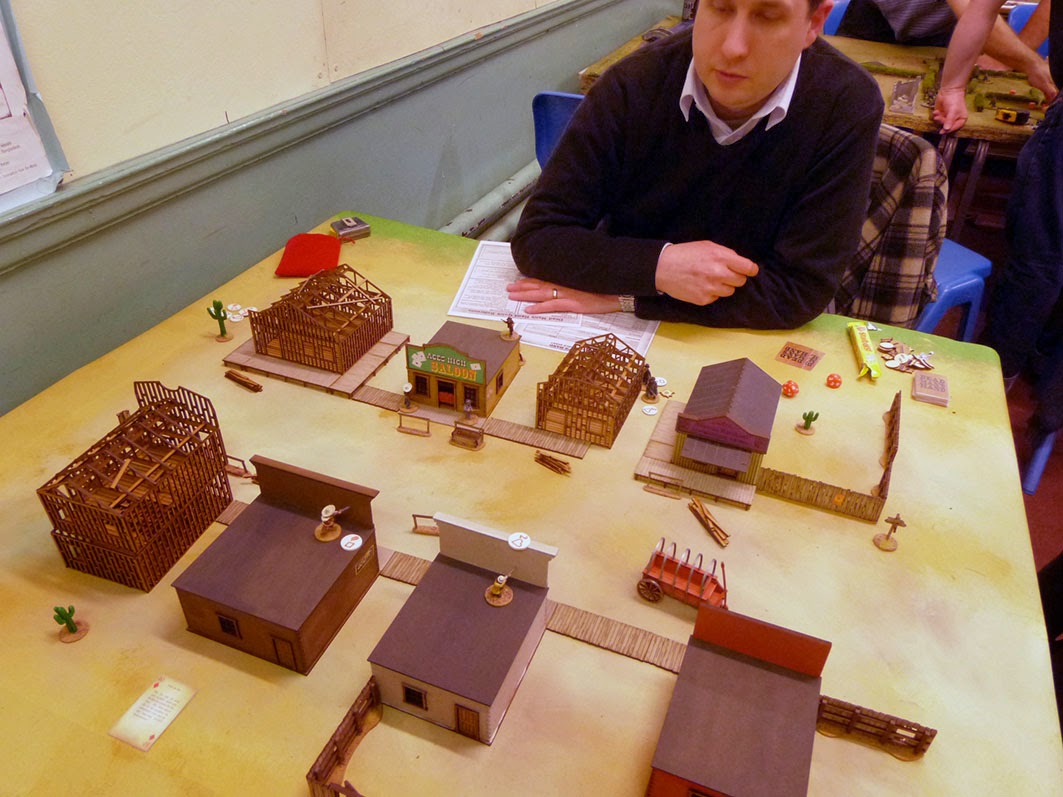 Nevertheless we set up the first scene, I had to keep Judge Barker alive and see off his pursuers who were hell bent on making him pay for hanging their buddy. Meeting a hail of lead on Main Street the deputies pulled the judge into cover and ended up sheltering behind the Aces High Saloon, unfortunately they ended up trapped here as the baddies closed in, one by one the deputies went down until eventually the Judge, slowed by an old war wound, took two shotgun barrels to the chest. 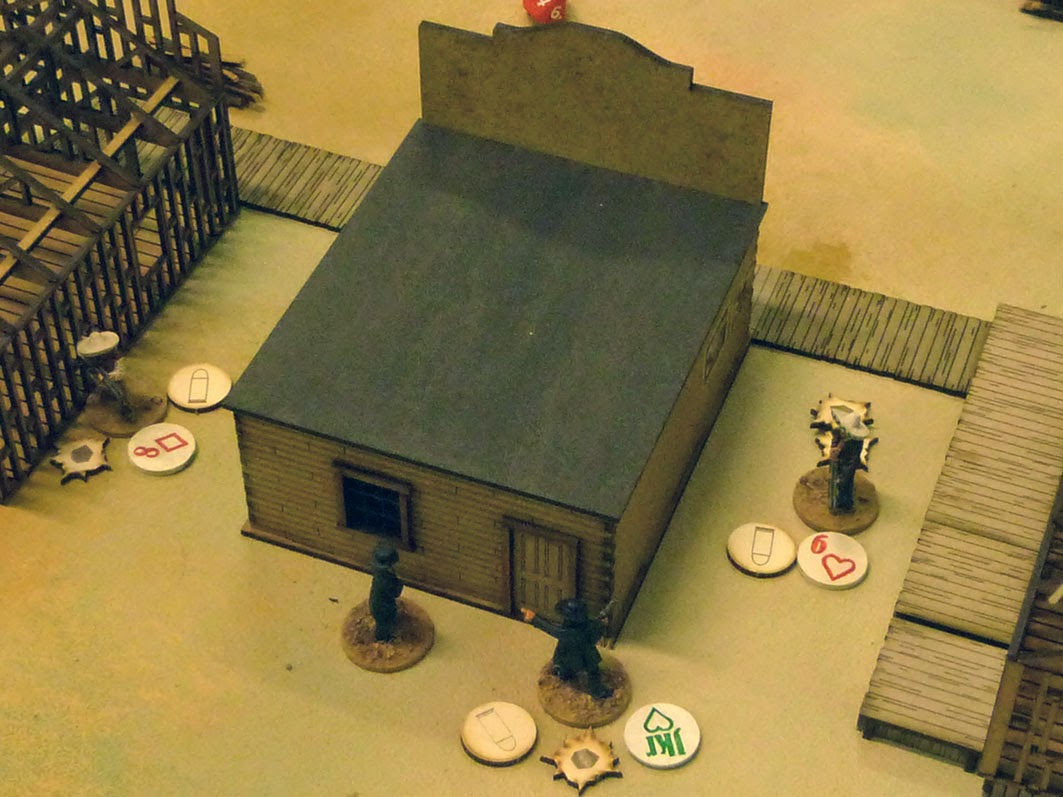 The action at the rear of the Aces, only the Judge and one deputy remain alive. 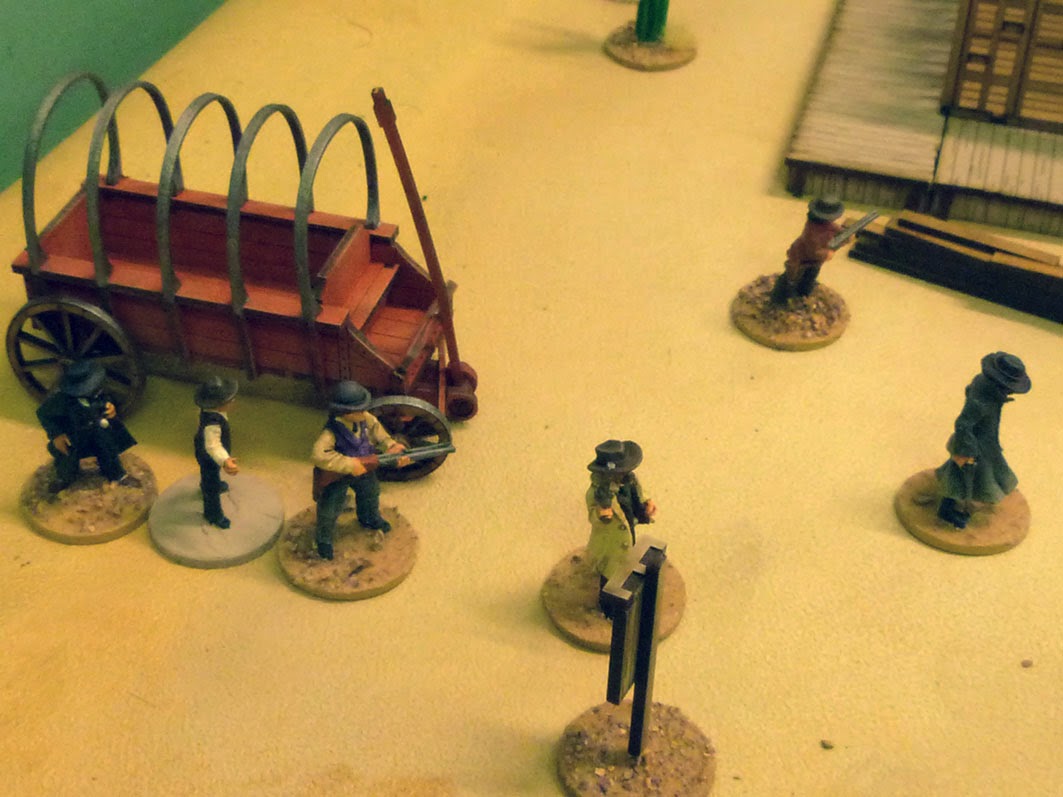 The witness surrounded by the new posse. I forgot the wagon with horses!


The Law was now on the back foot as the gang, fuelled with whiskey from the Aces and flushed with success decided to take out the only witness to their leaders foul deeds. The surviving lawman had quickly deputised some citizens and began a dangerous walk through Main Street to get him to the train station. Sure enough no sooner had they started than a fusillade of rifle shots brought down the lead deputy, two more stayed in the wagon with the witness while the other two ran for the backstreets to close on the assassins firing from the grocery store. The wagon continued and the occupants took several flesh wounds, but Jed and Wayne had managed to get to the back of the store and surprised Miguel by firing through the window, the store owner now made his presence felt and shakily fired off a shot at the outlaw, he missed and was sent to an early grave by a wounded and angry Miguel. This action however stopped Miguel exiting the building and he died to a well timed shotgun blast, shortly after another of the badmen at the side of the store also bit the dust. 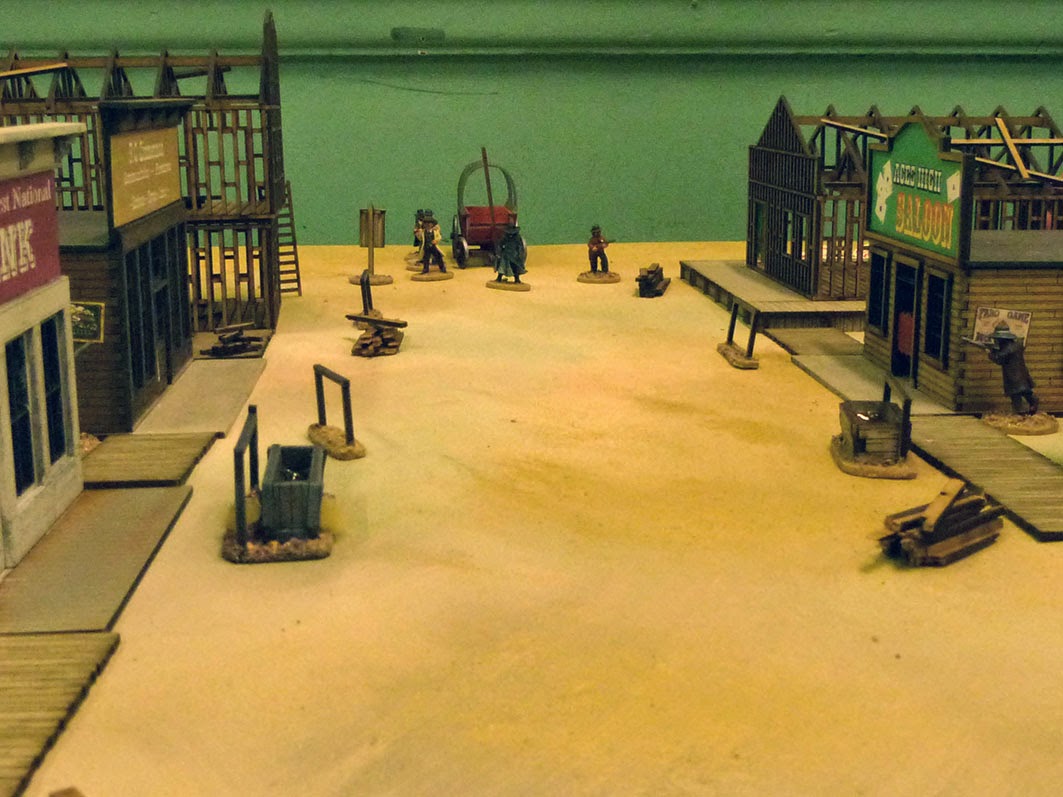 The outlaws fire began to slacken as they quickly sobered up, they decided to try one quick rush on the wagon, but before they could do this, the Law did the same, jumping from the wagon and abandoning the witness they closed with the hesitant criminals. Seeing another of their compadres gunned down the rest decided they had had enough and promptly fled the scene.

Posted by George Anderson at 09:27