Some time ago at one of our wargame weekends I wandered over to a table where Rob Broom was playing against my son's Carolingians with his Patrician Roman army, and very nice it looked too, as he pointed out some of the units I thought the choices were very cool, all Rob's army are nice but this one caught my imagination. Having finished my Early Imperial Legion I began to turn my thoughts to an army of the 5thC, the Late Roman army has become flavour of the month recently, ignored for years in favour of the lorica segmentata wearing, empire extending army, it is now taking its rightful place in the ranks.

The army in the late 4th and 5thC in the West has a very bad press, the idea of it being overwhelmed by constant Barbarian hordes as it is found wanting and the Empire in the West is lost is the default position. The truth of course is different, this army was still very powerful and most barbarians simply could not defeat it in open battle, it was well equipped and for a time still trained to a higher standard than its enemies. It did boost its numbers with allies and the recruitment of newcomers but still had a Roman heart. The most dangerous foe the army faced was itself  as civil wars took their toll of the veterans and the army lost the ability to recruit and retrain men to the same standard, also the loss of revenues from areas populated by even friendly barbarians had an effect on the army.

A number of leading generals (Patricians) took command of the field armies and usually campaigned successfully against the Empires enemies, but this only brought the enmity of ambitious courtiers and most of them paid for this with their lives, assassinated by hangers on and men with no vision. Before I bought a figure I bought several books on the Late Roman army including a history of the Fall of the West, I also bought two books on the most well known of Patrician generals Stilicho and Aetius and chose Aetius as my man. Aetius lived with the Huns for a time and was known as a friend to them and I wanted Huns in my army.

I got most of my figures from Footsore, many the same ones as in my Romano-British army but these troops would be more uniform, the Huns/Alans I got from the beautiful Aventine range of Steppe Cavalry. I built the army around four Roman Legions (more like a cohort at this time) as a core, many wargamers use the Christian Chi-Ro sign for this period, I decided not to, as far as I can tell it was only daubed on the shields of Constantine's men at Milvian Bridge but as this was in 312AD and the Notitia Dignitatum with hundreds of shield designs came out in 395AD then it's the military shields for my men. In support I brought in a contingent of Goths along with their own chieftain and likewise a couple of units of Huns or similar nomads. 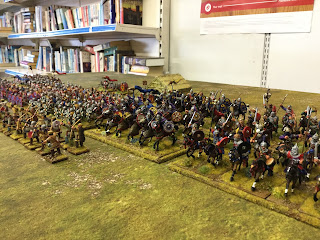 Roman generals of this period began to recruit their own bodyguard or household troops, not that they ever seemed to do them any good when the assassins came calling, these units were known as Bucellari and unlike the later Byzantine Bucellari seem to have operated with their general in the field rather than as seperate commands, so if Aetius is on the field he has to be attached to either Hun or Goth Bucellari, one or the other, not both. 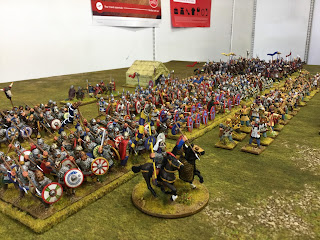 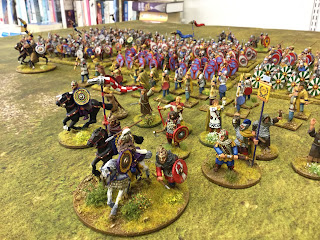 I have fought several battles with this army since its completion and it is a joy to play with, I thought putting Aetius with a cavalry unit would be detrimental to my command but it hasn't been so far, the Roman infantry are the backbone and the cavalry and the Goths are very good strike forces to destroy the enemy flanks. At first glance the army seems a little light in skirmish forces but this is made up for by the fact that the Nomads can all take bows and are experts with them, also you have the two bolt shooters which no one can ignore on the War and Conquest battlefield. Looking at the whole army arrayed for battle I am thinking perhaps one more Legion...... 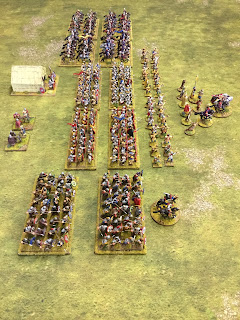 Posted by George Anderson at 22:07