I have been painting since 0845 this morning, sadly not another army but the shop front, this I hope will keep it from falling apart until the PO shut me down, but it is not a bet I would rush to take.

Anyway I am finished and sitting giving the door another wee bit of time to dry then I shall lock up for the day. So I have put my Romano-British out for their photo shoot while I wait, I shall do the Patrician Romans next week and that will give me a complete record of my four War and Conquest armies. 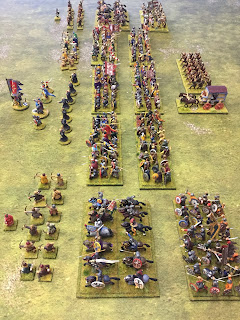 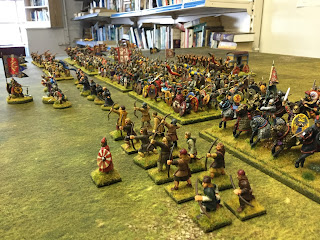 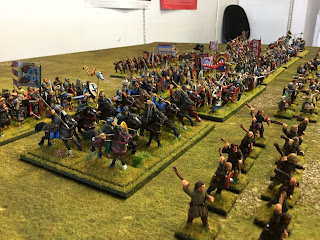 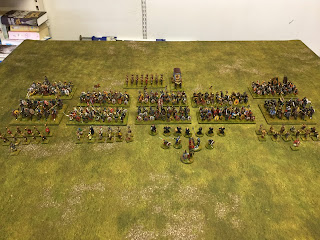 The British started, like the Saxons, as a small skirmish group for Dux Britanniarum but I got so entangled with the whole end of Empire thing along with the Dark Ages that I decided to expand them into a proper army. I started off with a kind of regimented look and then quickly dropped this the more I thought and read about what Britain was like once the Romans had left, not that you can simply pick up a book and all the information is laid out for you. Like anything during this period you dig into it a little and then choose your path.

As I wanted the troops to have a semblance of their Roman past about them I used almost exclusively late Roman figures, I also liked to think they were the kind of forces still clinging to an Imperial past in the bottom corner of Britain known as Dumnonia. Also in that area, perhaps the last proper 'Roman' part of Britain, were the cities of Cirencester, Gloucester and Bath (Corinium, Glevum and Aquae Sulis) who may have had their own militias along Roman lines. So my army has a place to call home, at least until 577AD when the cities fell to the Saxons and the Britons were cut off by land from their neighbours in Wales.

If Arthur was ever real this is the army he might have led, so that is always a nice talking point, in the Scarab Age of Warlords lists you get a choice between the Army of Vortigern or the Army of Ambrosius (Arthur), I have fought with both and like both but normally march with Ambrosius.

Next week it will be my last and newest army, the Patrician Romans, I do like these guys.
Posted by George Anderson at 16:07