Hottest day of the year so far yesterday, or so I was told, I was also told to look out for rain today but nothing so far, just a nice cool breeze. Anyway I turned up at the club to find Matt hard at work packing up all the wargame bits and pieces, and there is a lot, into boxes for a move, builders are working on the school heating system over the summer so we had to move to a different building and take what we required with us for a few months. A half hour of unintended physical labour followed, not made any better by the amount of wargamers flesh on show, shorts being the dress of the day.


Having lost time we quickly sorted a table and fought the usual three objective game, I really want to get out of the habit of this, I know it suits a club night but we tend to make tentative moves towards the easiest objective then in the last move you get a mad rush for the third. Maybe there is something wrong with me but I just cannot take to Warlord's scenarios for Bolt Action and I have not had much success getting off my bum and doing my own. Maybe it was the heat. 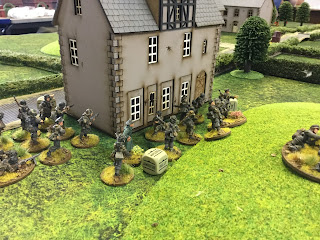 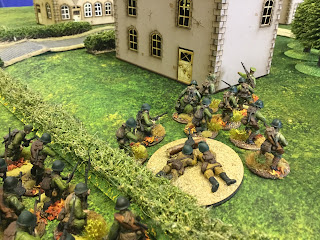 Anyway my force of course was short of what I really wanted but I went with a tooled up veteran squad and two normal squads, along with a sniper, MMG, flamethrower and a Marder III, I wanted to try a StuG III with a squad of riders but didn't have the points, maybe next time. We came at each other from opposite corners of the table, there was no fancy manoeuvring as we knew time was against us, Simon came on particularly boldly and threw his KV1 into action almost immediately against my sniper, cowering alone on a nearby hill. I had no option but to bring the Marder on and set it up in an ambush position to hopefully make Simon think twice about continuing his attack. It did not stop him and I loosed a shot off, bang, a hit, sadly only enough to stun the crew and bring the monster to a halt for a turn. 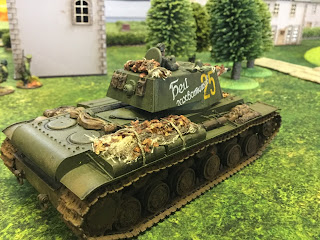 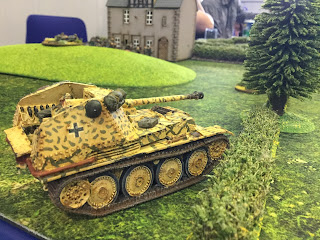 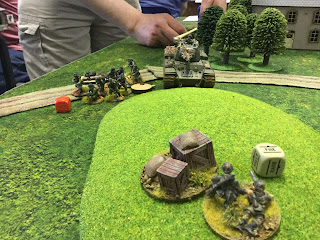 Meanwhile I ran two squads up the right flank towards the middle of the table, I pushed the flamer and finding a sniper in a nearby building let loose, I killed the spotter and set fire to the building so the sniper had to vacate, I was happy, I hate snipers in this game. 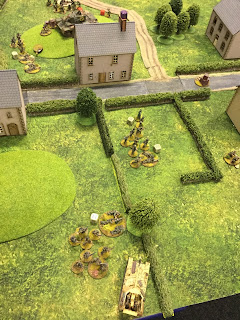 Simon moved his tank again with a squad of infantry in support, the Marder shot a second time but the shell bounced off, however my boys survived a hail of machine gun fire from the said tank by burrowing into the ground. The gods favoured me in the next turn as I drew several German dice out for the beginning of the move, my veterans moved forward and loosed a panzerfaust at the Russian tank but missed, the rest of the squad meanwhile decimated the nearest Russian troops, however they made their morale and stayed put. It was now the turn of the Marder again, this time the shot penetrated and the KV went up in a ball of flame. 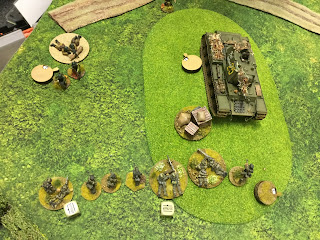 As predicted we both made a run for the middle objective as we knew we were on the last move, this time my flamer failed to hit the Russians sheltering behind a nearby hedge but it remained a danger. As we got to the end of turn five Simon had two objectives and the third was contested, it became clear that if we had gone another turn it would have been one each and a contested mid objective so we called the game a draw. I was pleased with my performance, I still have a long way to go with WWII but felt I had learned some things from previous games.
Posted by George Anderson at 09:44