I haven't splashed out on myself for some time now having bought the whole Roman army and put it aside to reduce as time goes on, I have also picked up a couple of novels, seven actually, from our book swap in the shop so not so much buying of books either.

All that changed yesterday, a grateful customer gave me a book token as I had been dropping off her pension every week as she was housebound, before you put me up for an award she only lives a good longbow shot from the PO. So I went into Lancaster yesterday and stopped by Waterstones, Military History must not sell or has suddenly become unpopular or more likely uncorrect as the section has been reduced and there were no new hardback books on the shelves. Disappointed and with the token burning a hole in my pocket I retreated to the graphic novel department, again a shadow of its former self, but I did pick up volume one of Suicide Squad and no sooner had I got home than I ordered up the other four, I do hope they are a better buy than Guardians of the Galaxy. 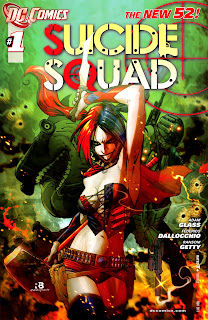 I am finding the new Max Hastings book on spies a bit heavy going, the gist seems to be that no matter how good your spy is if he is not believed or considered dodgy or his handlers draw the wrong conclusions, which seems to be par for the course, he is pretty much useless, and this permeates the whole book so far. The Japanese chapter was interesting and I found it amusing that wargames held before they attacked everyone showed they could not win, but the head honcho dismissed the results and went ahead.

I also bit the bullet before the missus comes knocking for my share of the wood burner, damp proofing and kitchen and got a new battle mat for my Romans, those boys better fight well. It is the same as my green one and it is like thick mouse mat material and comes in at £65.28 from Czechoslovakia, ten pounds of that being tax. I couldn't get a larger picture of the mat, but that is a dry riverbed going across it, I have seen one and it is lovely. Being a nut I am also going to get some hills and use my sharp sand to turn them into suitable slopes for the mat and I will need trees and one or two other pieces to fit the Roman East.

I have cavalry on the tray now, I decided to bite the bullet and get on with them, which leaves two infantry cohorts next in line.
Posted by George Anderson at 09:44