Despite my debilitating sore throat I stepped up to the mark and completed the Auxiliary cavalry, I really like these guys for some reason, they just seem to click, the officer is a bit wooden but I can live with that, the horses are really nice and I think the green colour scheme works just fine. I have attempted to get the next unit, Praetorians, ready for priming but I can't really shake the doldrums at the moment but I am hoping after last night I am on the mend.

I also managed  while I was basing the cavalry to coat those garish desert hills and terrain pieces with some of my 25 kilos of sharp sand, I also put the odd tuft on the surface and I think you will agree they are much better.

As I have some spare time I decided to show you a picture of the new mat and while I was at it muster the troops as they near completion to give me an idea of how they look en masse.


And here are some close ups of the battle line, no parade pansies here, just veterans of the Twelfth 'Thunderbolts'. I suspect they will be finished around Christmas or just after so I intend to enter them in yet another War and Conquest tournament, a friendly in February which friends are organising. I really need to fight more battles with my favourite Romano-British army, I have gone Greek as you know for the next WAC tourney instead of Dark Age, so perhaps back with King Arthur in May. Mind you I am enjoying playing with the Saxons against the British (and my son) during our warm ups for November. 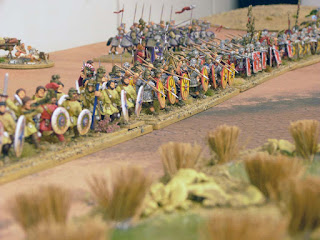 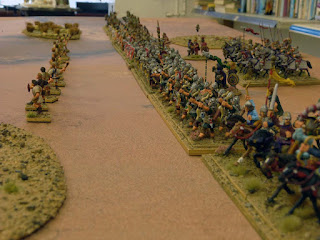 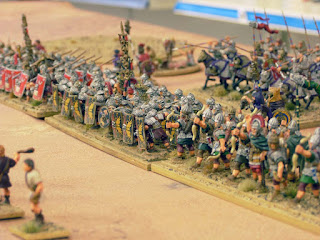 I should be back at the club on Tuesday for that Dystopian Wars game although it is getting a struggle to set out on such miserable cold, wet evenings, also next weekend is our last 'training' games before we head off to Newark on the 13th.
Posted by George Anderson at 15:32